I’d been living in Quito for a few months when the year-end holidays rolled around. I was eight months pregnant at that point—too far along to travel to Seattle or Rome to spend Christmas and New Year’s with either my family or my husband’s. Instead, a friend of ours flew in from New York City to visit us in the mitad del mundo, or so-called “middle of the world,” to escape the cold and spend New Year’s together.

Given my advanced state, we decided to cook dinner and stay in that night. But despite being in our own apartment, it still felt like we were far from home—instead of wearing gloves and heavy jackets when we stepped out onto our balcony, I simply threw a purple pashmina over my sleeveless top. And instead of singing “Auld Lang Syne” when midnight struck, we set a dummy on fire.

Ecuador’s biggest tradition on New Year’s Eve is that of the año viejo—a masked dummy stuffed with sawdust or paper and cardboard and dressed in old clothes. Año viejo means “old year” and the effigies represent the misfortunes of the past year. They are set on fire at midnight and must be burned completely, or else it is believed that any bad situations that plagued you during the previous year will return. Handmade papier-mâché masks in the likeness of political figures, movie characters, sports stars, animals, and more are sold everywhere. I remember seeing masks of everyone from the Ecuadorian president to the American commander-in-chief, from SpongeBob to Spider-Man.

We had picked out our dummy earlier that day while walking down Avenida Amazonas. The boulevard had been closed to traffic and was filled with people admiring giant dummies, or monigotes, set up in theatrical scenes on stages—decrying political scandals, asserting salvation through Jesus, supporting political movements, and generally providing a platform for social protest and proclamations. There were tables selling effigies of all sizes and rows of masks. We chose a small dummy and a dog-faced mask to burn, and we picked out masks for ourselves for fun.

An additional custom is to burn the effigy in the street and jump over it as it burns, once for each month of the year, to bring good luck. The fire can get big as the effigy burns, and dummies that have firecrackers stuffed inside are a special challenge. Leaping over a live fire while I had a belly bigger than Santa’s seemed beyond foolish, so we decided to ignite our dummy in the barbecue on our balcony instead.

Once the fires have been lit, those out on the street past midnight will be accosted by the viudas, or “widows,” of the smoldering remains—men dressed in drag who dance in the street and beg for money to pay for the “funerals” of their recently cremated husbands. (These funerals look suspiciously like beer binges!)

There was no “funeral” for us that night—just one small sip of champagne for me—but we had taken the tradition and made it our own. There’s no better way to make a new place start to feel like home. 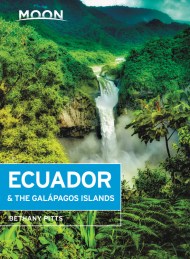