Always avant-garde, Barcelona combines dreamlike architecture, colorful festivals, rich gastronomy, and perpetual nights with a creative energy that sends nerve endings into overdrive. Two thousand years of history unravel as the labyrinthine streets wind their way around the city’s ancient heart, spilling out onto medieval squares, 19th-century boulevards, and a glamorous waterfront. A cosmopolitan metropolis bound only by its topographical limits, Barcelona is a hundred different cities rolled into one, and every experience of it is unique. Here are 25 things to do in Barcelona:

Be sure to visit as its soaring towers glow in the golden afternoon light.

2. Partake in vermut hour (weekends around midday), when locals gather to sip the traditional aperitif.

Pair it with a tasty tapa or two.

3. Feel your heart attune to the beat of the drums as the latest festa major kicks off in a riot of revelry.

4. Unravel 2,000 years of history as you lose yourself in the Barri Gòtic.

5. Wind down with an original cocktail in El Paradiso.

This hip speakeasy is concealed behind a fridge door.

6. Tuck into fresh seafood paella after a day at one of Barcelona’s many beaches.

Enjoy the sights and sounds of the city’s most famous street.

8. Feast your senses on the glorious produce of Mercat de la Boqueria.

Marvel at its soaring, stripped-back interiors.

11. Watch castellers scramble to death-defying heights to construct a human tower up to 10 tiers high.

12. Trace the roots of a genius at the Museu Picasso.

Focusing on Picasso’s formative years spent in his adopted city, more than 4,000 works by the 20th-century master form the permanent collection in this extensive gallery.

13. Enter into a topsy-turvy underwater world at Casa Batlló, one of Gaudí’s most spectacular creations.

14. Drink in style with an aperitif at the grandiose El Nacional.

It’s a former theater turned food court where you can pair your cava with an oyster or two, if you’d like.

15. Begin your day with a little bargain-hunting at Els Encants, one of the oldest flea markets in Europe.

16. Take a short walk over to the Museu del Disseny.

This massive arts institution brings all things design together under one roof.

Celebrate a day well spent with some Catalan bubbles and a plate of jamón.

18. Make a cultural stop-off to admire masterpieces of abstraction at the Fundació Joan Miró.

This museum is packed with seminal works by the Barcelona-born Surrealist.

19. Explore Sant Antoni, one of Barcelona’s most up-and-coming areas.

Bar Calders on Carrer de Parlament is a good option for eating or drinking.

Acrobats and drag queens swing from the rafters, and the dance floor fills up after midnight.

21. Contemplate the extraordinary geological outcrop of Montserrat from the Sant Jeroni viewing point.

23. Follow in the footsteps of Roman gladiators in Tarragona’s seaside Amfiteatre Romà.

24. Traverse the rugged cliffs and picture-perfect calas of the Costa Brava along the Camí de Ronda. 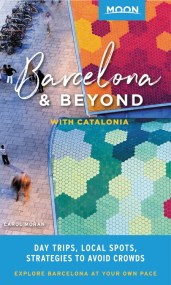 Whether you’re marveling at Gaudi masterpieces or cheering with locals at a fútbol match, soak up the best of Catalonia’s sun, sea, and delicious flavors with Moon Barcelona & Beyond.

25 Things to Do in Lisbon