From skiing and snowboarding to distillery tours and film festivals, here are the 8 best things to do in Salt Lake City, Park City, and the Wasatch Range.

1. Ski or ride legendary powder at one of the 10 ski resorts in the Wasatch.

Winter is no time to hibernate or slow down in the Wasatch. The mountains are calling! Between the 10 ski resorts, ample backcountry terrain, and miles of groomed Nordic trails, the cold just calls for the right layers and a little ambition.

2. Step into the shoes of an Olympian on the bobsled track at the Utah Olympic Park

Year-round, the Utah Olympic Park is a fun place to visit, whether to learn more about the Olympics or get an adrenaline rush, Olympian-style. The park is a sight seen by all who exit I-80 from Salt Lake City in the form of two massive ski jumps careening down the hills directly to the east, green in the summer, snow-covered come winter. These jumps are used throughout the year for everything from ski jump lessons and a giant tubing hill to an uphill grunt for the annual Red Bull 400 race.

A must on any Temple Square tour should be a visit to the Tabernacle—home to the legendary Tabernacle Choir at Temple Square, formerly known as the Mormon Tabernacle Choir (and still known colloquially as MoTab). The Grammy- and Emmy-decorated choir sings inside what is considered one of the most acoustically impeccable buildings in the world. Built from 1863 to 1875 and renovated in 2007, the choir hall is equipped with an 11,623-pipe organ capped by a domed roof enclosed in steel.

4. Traverse a moon-like landscape and compose mindbending photographs at the Bonneville Salt Flats

Ancient Lake Bonneville, from which the Great Salt Lake is descended, gave rise to another legacy: a massive deposit of salt stretching across southwestern Utah known as the Bonneville Salt Flats. This salt desert consists of 30,000 acres of Salvador Dali-level surrealism. Mountains rising out of a white sea. Your mind playing tricks on you as the monotonous backdrop distorts time and space. And cars racing across the 12-mile-long mass of sodium in pursuit of land speed records.

Utah holds the distinction of hosting what is arguably the most famous piece of land art ever made: Spiral Jetty, by Robert Smithson. Spiral Jetty’s name says it all: a small constructed extension into a body of water, in the shape of a spiral. Smithson crafted the 1,500-foot-long spiral from mud, salt, and black basalt rocks, all of which he found on-site. Spiral Jetty lies along a stretch of the northeastern coast of the lake in an area known as Rozel Point, where the water tends to have a pinkish hue from algae. Aligned with Smithson’s interest in erosion, Spiral Jetty never appears the same to the visitor. It might be partially covered by the water or fully submerged depending on lake levels. It could be covered in salt crystals and surrounded by water that appears gray, pea green, or red depending on what the microbial communities are up to.

Utah’s largest tourist-attracting event, the Sundance Film Festival is an annual international film festival spanning a little under a fortnight in winter. Pioneered by Robert Redford, Sundance draws celebrities and film industry members to Park City with a program that includes documentaries, international films, shorts, and all genres of other independent films. Many of the films are paired with panel discussions from cast and crew, and after-parties are held across town. The festival typically runs from late January to early February, with most of the excitement spanning the first weekend of the event.

7. Get a taste of local spirits and craft brews (you can even ride Town Lift from Park City Mountain to High West Distillery & Saloon for sips of award-winning bourbon!)

A decade or so ago, the craft brewery scene in Salt Lake was, well, a little lonely. Today, more and more breweries are opening around the city and showing up on the shelves of local liquor stores. PSA: if you find it funny that many breweries advertise the fact that they sell cold beer as if it were a commodity, know that this is because Utah liquor stores are generally prohibited from selling cold beer. So, if you need a six-pack to bring to a picnic or hike right away, your best bet is to pick it up at the brewery rather than one of the state-owned and -run liquor stores.

8. Summit Mount Timpanogos for sweeping views of the state

Climbing 11,750-foot Mount Timpanogos is on many a local’s and tourist’s summer summit list. Part of its allure stems from the fact that it is home to the only true glacier in Utah, and the geology that comes with this distinction. Marked by glacial cirques, vast basins, waterfalls, turquoise lakes, and plenty of terrain above tree line, Mount Timpanogos feels alpine and epic, but doesn’t require alpine climbing to summit. 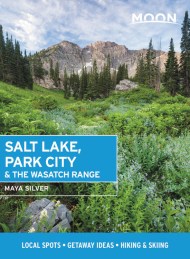