Part resort area and part working-class city, Lake Tahoe’s South Shore is what you make of it. Approaching Tahoe from the Bay Area or Sacramento to the west, the South Shore will likely be your point of entry on U.S. 50 to the town of South Lake Tahoe. If you’re looking for basic services such as supermarkets, banks, and drugstores before heading elsewhere, this is the place to stop. Budget travelers might appreciate the fast food joints and low-budget superstores, but with that comes run-down motels and congested traffic. Elsewhere on the South Shore you’ll find lively restaurants and bars, upscale lodging options, and lovely lake views and beaches. Just west of the California-Nevada border is the ski resort of Heavenly Village, jam-packed throughout the summer as well as winter.

The Tallac Historic Site (Hwy. 89, 3.1 miles north of U.S. 50, South Lake Tahoe, 530/541-5227, Sat.-Sun. late May-mid-June, daily mid-June-mid-Sept., free) was originally called “The Grandest Resort in the World.” Most of the complex’s 33 buildings, including three mansions, exude wealth and privilege. The centerpiece of the 74-acre complex is the Baldwin Museum (10am-4:30pm daily June-late Sept., free), located in the Baldwin Estate. The museum features exhibits about the local Washoe people and the importance of Lucky Baldwin to the history of California.

The Heller Estate (530/541-4975) was called Valhalla by its original owners. It is not open for tours but is set aside to showcase the art and music of the Tahoe region. The Heller boathouse has been converted into a 164-seat theater where concerts and plays are presented in summer. Smaller cabins on the grounds serve as summer galleries for photographers and local artists.

Next to all that history and grandeur is the Pope-Baldwin Recreation Area, which includes easy nature trails, a picnic ground, and a beach for swimming and kayaking (rentals are available). In winter, the Tallac buildings are closed, but the grounds are a great spot for cross-country skiing and snowshoeing.

Some have called the road around Lake Tahoe the most beautiful drive in the United States. Whether that’s true or not, the horseshoe-shaped inlet of Emerald Bay is its epicenter. Driving north from South Lake Tahoe, Highway 89 passes through Emerald Bay State Park. Even if you don’t have plans to visit the park, try to pull over at one of the several scenic overlooks, such as Inspiration Point (Hwy. 89, 8 miles north of South Lake Tahoe). Emerald Bay offers views you won’t want to miss.

Emerald Bay State Park (Hwy. 89, 10 miles north of South Lake Tahoe, 530/541-3030 or 530/525-3345, $10) was designated an “underwater” state park in 1994. It now encompasses the historical Vikingsholm mansion; Fannette Island (mid-June-Feb.), the only island in Lake Tahoe; the Eagle Point Campground; and a boat-in campground on the north side of the bay. In addition, there are miles of hiking trails, including the Rubicon Trail, from Emerald Bay State Park to nearby D. L. Bliss State Park. Some visitors still enjoy the underwater aspect—scuba divers can see the remains of boats, cars, and some artifacts that date back to the turn of the 20th century.

Wealthy benefactor Lora Josephine Knight had summered on the North Shore for 16 years when she decided to build her dream home on Emerald Bay. The result was the elegant Scandinavian-style mansion Vikingsholm Castle (Emerald Bay State Park, Hwy. 89, 530/525-9530, tours 10:30am-3:30pm daily late May-late Sept., grounds free, tours adults $10, ages 7-17 $8, cash or check only). This architectural gem is an intriguing reminder of a world gone by. Built by a Swedish architect in 1929, the castle-like structure is composed of granite boulders and includes towers, hand-cut timbers, and sod roofs green with growing grass. The interior is furnished with authentic Scandinavian period reproductions.

Visitors are welcome to enjoy the beach, the grounds, and the exterior of Vikingsholm at no charge; the mansion is only accessible on the tours. Access is via a steep one-mile trail from the Harvey West parking lot at the Emerald Bay Overlook (Hwy. 89, $10). You can also reach Vikingsholm via the Rubicon Trail (1.7 miles one-way) from Eagle Point Campground in Emerald Bay State Park ($8).

D. L. Bliss State Park (Hwy. 89, 2 miles north of Emerald Bay, 530/525-3345 or 530/525-7277, spring-fall, $10) has some of the best views in Tahoe. The park is directly north of Emerald Bay State Park, and the two are sometimes considered one unit. Hiking is a popular activity; trails include the Rubicon-Lighthouse Trail to Rubicon Point’s lighthouse, built in 1919 and restored and stabilized in 2001; it was once the highest-elevation lighthouse on a navigable body of water in the world. Swimming is great at the Lester and Calawee Cove Beaches, and trout and salmon fishing are also popular from D. L. Bliss’s shores. Three campgrounds are within the park. 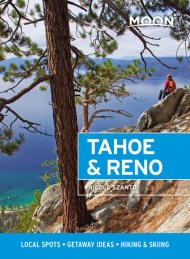 From the glittering lake and trail-lined mountains to Old West towns and artsy urban centers, experience the best of this adventurous region with Moon Tahoe & Reno.