Traveling by car affords the opportunity to meander along scenic back roads, across one-lane bridges, and down bumpy dirt roads; however, drivers should be aware that along with the rural scenery comes some inevitable run-ins with traffic congestion. And once you leave the highway, few roads are straight and flat; hills and curves are part of any Hudson River Valley road trip.

Two major interstates traverse the Hudson River Valley: I-84 connects Pennsylvania to Connecticut through southern Dutchess County. And I-87, the New York State Thruway, runs from New York City to Albany and then on to Buffalo.

The New York State Thruway (I-87) holds the record as the longest toll highway in the United States. It costs $6.50 to drive the length of the Hudson River Valley northbound, from the New York City line to the downtown Albany exit (141 miles). The return trip costs $11.50, due to one-way bridge fees. Exits are often 15 miles or more apart, so watch carefully for signs to avoid missing your turn. Occasional rest areas have gas, restrooms, and fast food, including Starbucks. Many rental cars are equipped with an E-ZPass transponder that will bill the tolls to your account—a big time saver during busy travel times.

The following five Hudson River crossings have a $1.50 toll in the eastbound direction:

There is a $5 toll to cross the Tappan Zee Bridge between Westchester and Rockland Counties, and an $8 toll for the George Washington Bridge. All bridges and toll roads in New York State are equipped with the E-ZPass automatic transponder system, which is compatible with most systems in the Northeast. If you want to use an E-ZPass in a rental car, you must first call E-ZPass to have the license plate registered on your account. Some agencies, including Avis, rent cars with E-ZPass installed. Cash-only lanes are clearly marked at most toll plazas.

The scenic Taconic State Parkway runs north-south from the Sprain Brook Parkway, which comes out of New York City, to I-90 near the Massachusetts state line and offers convenient access to many of the Hudson River Valley’s inland towns. Unlike the six-lane interstates that run parallel to it, the Taconic has just two lanes in each direction with a wide, green median in between. It crosses some of the prettiest woodlands, marshes, and fields of Westchester, Dutchess, and Columbia Counties, making it a popular route for motorists.

Several risks make the route one of the more dangerous in the state. When driving the Taconic for the first time, take these factors into consideration:

U.S. Route 9 and Route 9W on the east and west sides of the Hudson River are slower north-south routes through the valley. 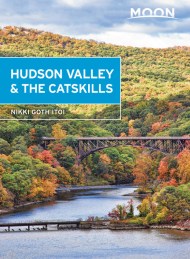