Enjoy the brightest season with this one-week road trip itinerary that takes you through New England’s fall foliage displays. Keep in mind that fall color depends on fickle weather conditions, but the season typically starts in mid-September in Vermont and New Hampshire, and spends the next two months working its way south. Rhode Island hits its stride in the last two weeks of October.

Hit the Big Apple and enjoy classic NYC: Hop a ferry to the Statue of Liberty, get panoramic views of from the One World Observatory, then pick up bagels and lox for a picnic in Central Park, which is stunning under a canopy of colorful leaves.

Follow the Hudson River Valley toward Great Barrington, Massachusetts, then leave the highway behind for the winding roads through the Berkshires. Stretch your legs on a hike up Monument Mountain, where you’ll see bright leaves rolling through a series of quiet valleys. Visit the Norman Rockwell Museum for a glimpse of autumns past—many of his canvases feature bright New England falls. Settle into Stockbridge for a cozy evening of live music by the fire in The Red Lion Inn’s pub.

Keep pointing north on back roads—or trade your car for a bike on the Ashuwillticook Rail Trail—leaving plenty of time to stop at farm stands along the way. Route 8 is particularly scenic from Pittsfield to North Adams, winding past the Cheshire Reservoir and slopes of Mount Greylock. In fine weather, drive all the way to the summit of Mount Greylock, which looks out over a landscape of brooding evergreens and colorful deciduous trees, but if you find yourself a cold, rainy afternoon, warm up in MASS MoCA, the sprawling modern art museum in the heart of workaday North Adams.

Visit the site of Vermont’s most famous Revolutionary-era battle in little Bennington, then follow Route 9—whose changing elevation offers a varied palette of colors—to Brattleboro, the hippie heart of southern Vermont’s creative culture. Try to catch a circus show or gallery walk while you’re there, join a tasting of unusual sour beers at Hermit Thrush Brewery, or spend the afternoon picking heirloom apples at Scott Farm Orchard, which offers a magnificent combination of fall fruit and foliage.

Take a roundabout way toward the town of Woodstock, tracing a route that includes tasting aged cheddar in Grafton’s time-warp village center. Skip across to scenic Route 100, which ducks through deep valleys and over rushing mountain streams on its way to the President Calvin Coolidge State Historic Site. The historic site is tucked into a quiet hollow that’s stunning in autumn and a good place to hear Yankee lore about the Vermont-born president. Then visit Long Trail Brewing Company, which often features special autumn brews like the Harvest Barn Ale.

Take on the twists and turns of the Kancamagus Highway, where each roller-coaster dip brings fresh views of the rugged, high mountain landscape. There are plenty of trails and riverside picnic spots to relax at along the way, but save some daylight for an afternoon adventure: Peak baggers can zip to the top of Mount Washington, which feels like a slice of early winter with views of fall foliage in the surrounding valley floors. For a lower-elevation view of the trees, head to Flume Gorge, where a covered bridge glows bright red against a backdrop of vivid yellow and orange leaves.

Get an early morning start, and plan to drop your car off before exploring Boston on foot. With an afternoon in the city, plan to walk the Freedom Trail, winding from the bright trees of Boston Common through Revolutionary sites to the historic North End and concluding at the Bunker Hill Monument. 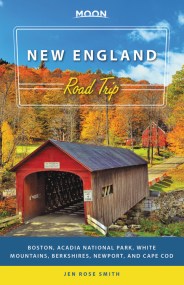 Discover an America brimming with culture and history, both old and new!

From the misty mountains in Maine to the coastal charms of Cape Cod, there's no shortage of adventure in New England: Get ready to hit the road with Moon New England Road Trip.

Discover an America brimming with culture and history, both old and new! Moon New England Road Trip can do everything but change the radio station. Inside you'll find:


With Moon New England Road Trip's practical tips, detailed itineraries, and insider's view, you're ready to fill up the tank and hit the road.