Puerto Rico is a rectangular island, situated roughly in the middle of the Antilles, a chain of islands that stretches from Florida to Venezuela and forms the dividing line between the Atlantic Ocean and the Caribbean Sea. The Antilles are divided into two regions—Greater Antilles and Lesser Antilles. Puerto Rico is the smallest and easternmost island of the Greater Antilles, which include Cuba, Hispañola (Dominican Republic and Haiti), and Jamaica.

In addition to the main island, which is 111 miles east to west and 36 miles north to south, Puerto Rico comprises several tiny islands or cayos, including Mona and Desecheo off the west coast and Vieques, Culebra, Palomino, Icacos, and others off the east coast. The northern and eastern shores of Puerto Rico are on the Atlantic Ocean, and the southern shores are on the Caribbean Sea. To the west is Mona Passage, an important shipping lane that is 75 miles wide and 3,300 feet deep.

The island was believed to have been formed between 135 million and 185 million years ago when a massive shift of tectonic plates crumpled the earth’s surface, pushing parts of it down into deep recesses below the ocean floor and pushing parts of it up to create the island. This tectonic activity resulted in volcanic eruptions, both underwater and above it.

Two significant things happened as a result of all this geologic activity. The Puerto Rico Trench was formed off the island’s north coast. At its greatest depth, it is 28,000 feet below sea level, making it the deepest point known in the Atlantic Ocean. Secondly, it formed the mountainous core of Puerto Rico that spans nearly the entire island from east to west and reaches heights of 4,390 feet above sea level. Volcanic activity is believed to have been dormant in Puerto Rico for 45 million years, but the earth is always changing. The Caribbean plate is shifting eastward against the westward-shifting North American plate, which has resulted in occasional earth tremors through the years. Although this activity is suspected to have led to the volcanic activity in Montserrat in recent years, its danger to Puerto Rico is its potential to cause earthquakes, not volcanic activity.

Puerto Rico has three main geographic regions: mountains, coastal lowlands, and karst country. More than 60 percent of the island is mountainous. The island’s mountains, which dominate the island’s interior, comprise four ranges: Cordillera Central, Sierra de Cayey, Sierra de Luquillo, and Sierra de Bermeja. The largest and highest range is Cordillera Central, which spans from Caguas in the east to Lares in the west. Its highest point is Cerro Punta (4,390 feet above sea level), in the Bosque Estatal de Toro Negro near Jayuya. Sierra de Luquillo is in the northeast and contains the Caribbean National Forest, home to El Yunque rainforest. These two mountain ranges feature dramatic pointed peaks and lush tropical vegetation. Sierra de Cayey, in the southeast between Cayey and Humacao, and Sierra de Bermeja, in the southwest between Guánica and the island’s southwestern tip, are smaller in area and height, drier, and less forested.

The coastal lowlands span more than 300 miles around the rim of the island, 8-12 miles inland in the north and 2-8 miles inland in the south. Formed through time by erosion of the mountains, the coastal lowlands are important agricultural areas that benefit from the rich soil and water that wash down from the mountains. Much of the area is defined by sandy or rocky beaches and mangrove swamps, although the mangrove forests are being whittled away by development.

The island’s third region is unique. The karst region spans the island’s northern interior, from San Juan in the east to Aguadilla in the west, and the southern interior, from Ponce in the east to San Germán in the west. It can also be found in isolated pockets throughout the island, as well as on Mona Island off the west coast. The karst region is distinguished by a fascinating landscape of sinkholes, cliffs, caves, and conical, haystack-shaped hills called mogotes. More than 27 percent of Puerto Rico’s surface is made up of limestone, and its erosion from rain helped create the beguiling patchwork of hills and holes. One of limestone’s unique properties is that it reprecipitates and forms case rock that is impervious to chemical and climatic change, which has basically frozen the odd formations in time. In addition, water produced by reprecipitation bubbles up to hydrate the earth’s surface, and drips down, creating subterranean rivers and caves.

As a result of its karst region, Puerto Rico has some of the most significant cave systems in the western hemisphere and the third-largest underground river, Río Camuy. The public can tour part of the massive cave system at Las Cavernas del Río Camuy in the municipality of Camuy.

In addition to Río Camuy, Puerto Rico’s other major rivers include the north-running Grande de Arecibo, the island’s longest; La Plata, Cibuco, Loíza, and Bayamón, which run north; and Grande de Añasco, which runs west. There are no natural lakes in Puerto Rico, although 15 reservoirs have been created by damming rivers. But there are several natural lagoons, including Condado and San José in San Juan, Piñones and Torrecilla in Loíza, Joyuda in Cabo Rojo, Tortuguero in Vega Baja, and Grande in Fajardo.

Puerto Rico’s climate is classified as tropical marine, which means it’s typically sunny, hot, and humid year-round. The temperature fluctuates between 76°F and 88°F in the coastal plains and 73-78°F in the mountains. Humidity is a steady 80 percent, but a northeasterly wind keeps things pretty breezy, particularly on the northeast side of the island.

Nobody wants rain during a tropical vacation, but precipitation is very much a part of life in Puerto Rico. Although there are periods when the deluge is so heavy that you might think it’s time to build an ark, rains are generally brief and occur in the afternoons. The average annual rainfall is 62 inches. Although it rains throughout the year, the heaviest precipitation is from May to October, which is also hurricane season. The driest period is January to April, which coincides with the tourism industry’s high season. Keep in mind that the north coast receives twice as much rain as the south coast, so if the outlook is rainy in San Juan, head south.

As the devastation of Hurricanes Irma and Maria in 2017 illustrated, tropical storms pose a very real threat to Puerto Rico. Much of the island was without electrical power for an entire year following Hurricane Maria, a category 4 storm that did $139 billion worth of damage to the island. An estimated 3,000 people died either as a direct result of the storm or because of medical complications due to lack of electricity.

But Hurricane Maria is a considered a “storm of the century,” meaning it was highly irregular and far from the norm. The previous biggest storm was Hurricane Georges, a category 3 that struck in 1998 and did $2 billion of damage.

According to the U.S. National Weather Service, hurricane season in the Caribbean spans from June through November, but August through October is when Puerto Rico is most vulnerable.

For the latest information on weather conditions in Puerto Rico, visit the National Weather Service. 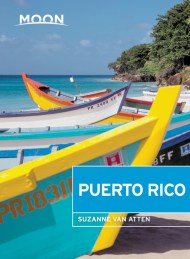 Relax beneath palm trees, kayak through bioluminescent bays, or dance the night away to the sounds of salsa: Experience the Island of Enchantment with Moon Puerto Rico.