I spent a large part of my first winter in San Miguel de Allende burrowed under a pile of wool blankets. The tiny apartment I’d rented, tucked behind a corner shop, was unheated and drafty, with rattling windows overlooking a grove of shady trees. In the mornings, it was often so cold in the kitchen that I could see my breath in the air as I drank my coffee.

I wasn’t prepared for the cool winter nights in Mexico’s semi-arid central highlands, where temperatures sometimes drop to freezing. But I was quickly enamored of the season—and there were, of course, many benefits to being closer to the equator during the winter. The skin on my shoulders was pink and freckled from days spent beneath the brilliant midday sun, even as I shivered in bed at night. The days were longer than they were at home in California, often ending with glorious sunsets, which blanketed the sky in magenta and gold.

Even more enchanting was the old-fashioned ambience and pageantry in the small town of San Miguel. On December nights, I’d often see families process down the cobblestone streets on their way to posadas (traditional Christmas festivals), holding candles and accompanied by musicians. Though poinsettias grow wild throughout the city, they also fill the gardens in the town square in December. Fireworks explode over the pink towers of the parish church on Thanksgiving (a nod to the many Americans living in town), and again on Christmas and New Year’s Eve.

Within weeks, I had fallen in love with the town’s cozy atmosphere and relaxed rhythm, making a few local friends at gallery openings and cantinas, and spending hours in cafes or sunny park benches, reading or daydreaming. A month later, I decided to extend my stay in Mexico indefinitely. By March, I had moved into a more permanent apartment in the center of San Miguel del Allende, just as the jacaranda trees had begun their spring bloom, blanketing the city in purple blossoms.

Here are some tips for planning your winter getaway to San Miguel de Allende.

Don’t let me scare you. By almost any standard, winter in San Miguel de Allende is mild. Midday temperatures usually hover in the 60s and 70s, and, though it cools off considerably at night, you’ll rarely experience a frost. Expect high-30s to high-40s on most nights. In older homes, the old stone walls will often trap the cold, but it’s nothing a space heater and some wool blankets won’t cure.

Pack for all four seasons when visiting San Miguel during the winter months. Sunny afternoons call for light clothes and open-toe shoes, while chilly mornings and evenings require bundling up with layers. Sturdy footwear (for walking on cobblestones), sunscreen, and a hat are musts, plus a camera. You can skip the umbrella, though: it almost never rains between November and June.

The dry and sunny weather, which warms to the mid-70s on most afternoons, makes winter a perfect time for outdoor activities. One of my favorite spots for a stroll is El Charco del Ingenio, a beautiful desert-plant-focused botanical garden above San Miguel. Or book a day trip to La Cañada de la Virgen archeological site with informative (and entertaining) local anthropologist Albert Coffee.

Most accommodations in San Miguel are better equipped to handle the winter weather than my drafty apartment—and there are dozens of memorable places to stay in town. I have always loved the eclectic yet ultra-luxe aesthetic at tiny L’Otel on Chiquitos street, and all four rooms have chimneys to warm the air on cool winter nights. At the long-running Hotel El Atascadero on the outskirts of San Miguel, the cost of your room includes a daily load of firewood; the staff comes to light a fire in your in-room chimney at the hour you request.

Worth noting: While you will almost always find a room available somewhere in San Miguel, it’s best to book far in advance if you’d like to visit during the holiday season, which is traditionally considered the tourist high season in San Miguel. If possible, book your room or rental six months ahead.

Most Mexican families celebrate Christmas on December 24th, saving the 25th for el recalentado—or leftovers—from the big meal the night before.

You must literally take care that your hair does not catch on fire during the over-the-top pyrotechnic show in San Miguel’s town square on New Year’s Eve. You can also catch the fireworks from a much safer distance at the rooftop bars at Hotel Nena or the Rosewood.

In the post-Christmas comedown, Three Kings Day is a welcome return to celebration. On January 6th, families exchange gifts and share a rosca de reyes, a wreath-shaped sweet bread topped with crystallized fruit with a baby Jesus figurine baked inside.

The town’s namesake, a hero of the independence, is celebrated on his birthday, January 21st.

Families take their baby Jesus from the family altar to be blessed at church on February 2nd, which coincides with the start of San Miguel’s gorgeous plant and flower sale in Parque Juárez.

One of many special events held at San Miguel’s beautiful botanical gardens closes the winter season, though the weather is generally hot and summery by the end of February. 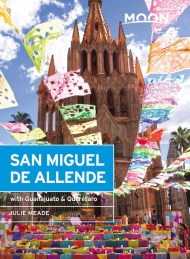