On Isla Navarino’s north shore, across the Beagle Channel from Argentine Tierra del Fuego, Puerto Williams is the so-called “Capital of Antarctica” and gateway to the rugged Dientes de Navarino backcountry circuit, a five-day slog through soggy mountainous terrain. Local residents look forward to a permanent ferry link to nearby Argentina, but there is political opposition across the channel because myopic Ushuaia impresarios fear losing business to tiny Williams, however unlikely that possibility.

Founded in the 1950s, formerly known as Puerto Luisa, the town (pop. 2,000) has paved sidewalks but gravel streets. Most residents are Chilean naval personnel living in relatively stylish prefabs. There are also some 60 remaining Yámana descendants, only a few of whom speak the language—now a hybrid including many Spanish and English words—among themselves.

Overlooking the harbor is the Proa del Escampavía Yelcho, the prow of the cutter that, under Luis Pardo Villalón, rescued British explorer Ernest Shackleton’s crew from Elephant Island on the Antarctic Peninsula in 1916. A national monument, the bow survived collisions with icebergs to reach its destination. Returning to Punta Arenas, the entire ship makes a cameo appearance in original newsreel footage in British director George Butler’s Endurance, an extraordinary documentary of Shackleton’s adventure.

Very professional for a small-town museum, Williams’s Museo Martin Gusinde (Aragay 1, tel. 061/621043, 9:30am-1pm and 3pm-6pm Mon.-Thurs., 2:30pm-6:30pm Sat.-Sun., free) has exhibits on geology, plants, and taxidermy, a marker for the former post office, and a sign for the coal mine at Caleta Banner, on nearby Isla Picton, which provisioned the Yelcho on its rescue mission. Nearby is the Parque Botánico Omora, an organized selection of native plants.

Built in Germany for operations on the Rhine, the MV Micalvi shipped supplies between remote ranches and other settlements before sinking in Puerto Williams’s inner harbor in 1962. The upper deck and bridge remain as the yacht club’s bar-restaurant.

Getting There and Around

In summer, the ferry Bahía Azul (US$210 for a bunk, US$175 for a reclining seat) sails to Punta Arenas (34 hours) at 10pm Saturday. Nearly all services are concentrated around the Centro Comercial, a cluster of storefronts just uphill from the Muelle Guardián Brito, the main passenger pier. These include the post office, several telephone offices, Banco de Chile, the Cema-Chile crafts shop, and Manualidades, which rents mountain bikes. 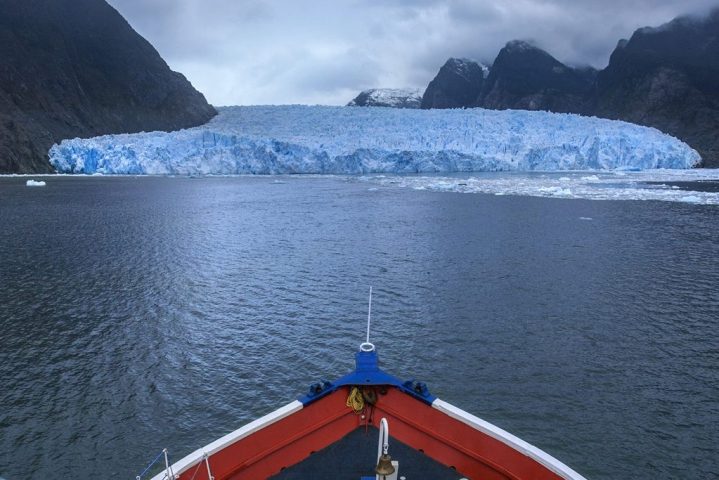