History, politics, power—and the world’s best free museums. To experience the best of Washington DC in a few days, stay downtown in a hotel like Penn Quarter’s Hotel Monaco, a short walk or just a few Metro stops away from the halls of power and the best restaurants and nightlife. You don’t need a car; everything in this itinerary is accessible by Metro, a taxi or ride-share, or walking.

Start your day at Pete’s Diner, one block from the U.S. Capitol. You’ll be joined by Hill staffers and perhaps a few lawmakers; former Speaker of the House John Boehner had eggs and coffee here almost every day.

Public Transit: To get from downtown/Penn Quarter to the U.S. Capitol, take the Metro Blue, Orange, or Silver Line from Metro Center to Capitol South.

Head west on Independence Avenue SE to the U.S. Capitol. You can explore the grounds and see the imposing dome from every angle; get a spectacular up-close selfie on the west side. No matter how many times you’ve seen photos—or passed by on your way to work—it’s always awe-inspiring. If you’d like a tour, reserve one in advance via the U.S. Capitol Visitor Center or through your member of Congress; same-day passes are sometimes available at the information desk on the visitor center’s lower level, but don’t count on it. The visitor center has public exhibits about the Capitol and Congress, as well as a gift shop.

Across from the visitor center entrance on 1st Street, get a glimpse of the Library of Congress and the Supreme Court of the United States. If you did not take a Capitol tour, you’ll have time before lunch to pop inside the United States Botanic Garden, a hidden gem on the Capitol grounds full of thousands upon thousands of plant specimens from around the world.

For lunch, go to Eastern Market on 7th Street SE between C Street NE and North Carolina Avenue SE, 15 minutes from the Capitol by foot. The crab cake at Market Lunch, the casual counter inside the main market building, is one of the best in DC, but if you prefer finer dining, try Acqua Al 2 across the street. On the weekend, people-watch and shop for local, DC-inspired artwork at the outdoor market; on weekdays, drop by Bullfeathers back at 1st Street and D Street for happy hour and political gossip.

Celebrate your first night in the city with the seafood tower at Old Ebbitt Grill. Before you sit down, however, detour one block past the restaurant to see the White House and Lafayette Square during the golden hour. End with a nightcap at the historic Round Robin Bar at the Willard InterContinental.

If you have tickets to the Smithsonian’s National Museum of African American History and Culture, grab coffee at Compass Coffee on 7th and F Streets NW, then beeline to the museum to be in line a few minutes before your entry time. You’ll need the better part of a day to see everything, but it’s worth it; start in the basement and work your way up, then have lunch at Sweet Home Café before the pop culture exhibits.

Public Transit: To get from downtown/Penn Quarter to the National Mall, simply walk south on 7th Street or 9th Street to Constitution Avenue. It’s 10-20 minutes by foot to the major museums.

If you didn’t get tickets, the Smithsonian’s National Museum of American History and National Air and Space Museum are the other must-see museums. If you try to do both, don’t miss the Star-Spangled Banner and first ladies’ dresses at the former and, of course, the spaceships at the latter. Mitsitam Native Foods Café at the National Museum of the American Indian is a good option for lunch.

You can stay in the museums if you have foul weather, but otherwise, explore the memorials on the National Mall. Take a walking tour to hit the Washington Monument, Martin Luther King Jr. Memorial, Franklin Delano Roosevelt Memorial, Thomas Jefferson Memorial, and Tidal Basin.

Public Transit: To get from the memorials on the southwest side of the Mall back to downtown/Penn Quarter, take the Metro Green or Yellow Line from L’Enfant Plaza to Gallery Pl-Chinatown.

Relax before a late dinner at Jaleo, the José Andrés Spanish restaurant that ignited the nation’s tapas obsession. After, grab a taxi or ride-share to the Lincoln Memorial, which absolutely must be seen at night.

Start the day at the National Gallery of Art. If you didn’t have breakfast, grab coffee and a pastry in the Pavilion Café in the Sculpture Garden. There’s something for every art lover here: Choose the West Building for the French Impressionists and Da Vinci’s only painting on view in the United States, or the East Building for modern art.

When you get hungry, head to CityCenterDC, where you can parse the works over leisurely brunch or lunch at DBGB Kitchen & Bar, or grab a healthy juice at Fruitive. Here, you can enjoy an afternoon of window shopping the luxury stores, or walk about 15 minutes south to the Newseum, which is totally worth the ticket price in the era of “fake news.”

Public Transit: To get from downtown/Penn Quarter to U Street/Shaw, take the Metro Green or Yellow Line from Gallery Place-Chinatown to U Street/African-Amer Civil War Memorial/Cardozo, or grab a taxi/ride-share.

Spend the evening at U Street and Shaw, DC’s nightlife hub, bustling with trendy restaurants, cocktail and wine bars, and dance clubs. This is the neighborhood to try Ethiopian food—the Washington area has the largest Ethiopian population in the United States, and restaurants here include Dukem Ethiopian Restaurant and the more upscale Etete. For the definitive DC nightlife experience, catch a show at the 9:30 Club, followed by a late-night half-smoke (a spicy half-pork/half-beef sausage, served on a bun and smothered in chili) at the famous Ben’s Chili Bowl.

You could spend days—weeks—touring DC’s museums and memorials, and if you’re visiting for more than a few days, it’s worth choosing one or two museums to explore at a more leisurely pace.

With more time, spend a morning in Dupont Circle. Take your coffee in the park at the center of the circle, a great spot to people-watch among locals, and meander to Kramerbooks, one of DC’s essential bookstores, stocking top fiction and nonfiction, including the latest political tomes. The Phillips Collection, the country’s first modern art museum, is worth a few hours.

Spend an afternoon in Georgetown, shopping top brands and independent boutiques on the brick-lined streets or, in exceptionally beautiful weather, renting a boat on the Potomac River. Enjoy a pre-dinner cocktail at one of the neighborhood’s stylish hotels—The Lounge at Bourbon Steak at the Four Seasons and The Observatory at The Graham Georgetown are good bets—before dinner at Fiola Mare, where you should ask for a table in the see-and-be-seen dining room for some of the best Italian seafood in the city.

Before you go, make time for a performance, because DC has a vibrant theater scene on par with the world capitals. Get tickets for anything at The John F. Kennedy Center for the Performing Arts before your Georgetown dinner, or better yet, see a thought-provoking new play at the Woolly Mammoth Theatre Company in Penn Quarter or Studio Theatre in Logan Circle. 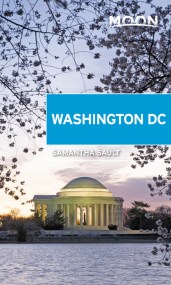 History, politics, and the world’s best free museums: DC is a bustling powerhouse of a city. From strolling the National Mall to hobnobbing at happy hour, get to know the capital with Moon Travel Guides.