Waterton-Glacier International Peace Park joins across the 49th parallel, forming the world’s first international peace park across the borders of Montana, US, and Alberta, Canada. Grizzly bears ignore the international border between Waterton Lakes National Park and Glacier National Park. So do moose, wolves, and mountain lions. But for humans, the border is a big deal. The 20-foot-wide unnaturally straight swath visibly bisects the mountains surrounding Upper Waterton Lake.

Hikers can walk south from Canada to Goat Haunt, US. They can cross the boundary on foot without going through customs until reaching the Goat Haunt Ranger Station. In front of the station, a picnic table serves as the official desk for US custom’s officers to stamp passports.

The Trail from Waterton to Goat Haunt

Departing from the southwest corner of Waterton Townsite, the rolling trail follows the west shoreline for 13.6 kilometers/8.5 miles along Upper Waterton Lake. The route passes the Bertha Lake Trail cutoff before taking a short plunge to Bertha Bay. From there, hikers encounter creeks, small wildflower meadows, and mixed forests. The ease of walking the trail comes from minimal elevation gain.

At the halfway point, the trail crosses the international boundary. Westward, the border swath shoots up the steep hillside of Mt. Richards. Eastward, across Upper Waterton Lake, the border rises vertically up Mt. Boswell. Two obelisks mark the boundary. They commemorate the Convention of 1818 and the Treaty of 1925 that settled boundary agreements. The border also contains a backcountry campsite on the Canadian side and a dock in Boundary Bay on the U.S. side.

From the border crossing, views enlarge of Mt. Cleveland, Glacier’s tallest peak. The trail climbs a rocky precipice before intersecting with the Boundary Creek Trail and crossing Boundary Creek. It touches the shoreline and dodges back into the trees, where grizzly bear footprints appear in the mud. Near Goat Haunt, the trail cuts through with several junctions, including trails to Boulder Pass, Rainbow Falls, and Kootenai Lakes. After a swinging bridge crosses the rushing Waterton River, the route ends at the head of Upper Waterton Lake where hikers go through customs and hop the boat back up lake.

How to Hike It

Hikers can walk the trail spring through fall with a round-trip distance of 27 kilometers/16.8 miles. But early June to late September, Waterton Shoreline Cruise Co. (403/859-2362) adds the option of walking down lake and returning via boat to the Waterton Townsite. Purchase tickets at the Waterton Townsite Marina prior to hiking and allot at least four hours to reach Goat Haunt on foot.

Twice a week in summer, guides from Glacier’s National Park Service and Waterton’s Parks Canada team up to lead a joint walk on the trail. At the border, the group stops for a hands-across-the-border ceremony. The 7-hour Guided Peace Park Hike, which is limited to 35 people, usually takes place on Tuesdays and Fridays. With no advance reservations, the hike requires preregistration for the next scheduled hike at the Waterton Lakes Visitor Information Centre (403/859-5133) or the St. Mary Visitor Center in Glacier (406/732-7750).

The two-nation hike through Waterton-Glacier International Peace Park is unique. Walking across the border reinforces the shared ecosystem of the parks that UNESCO recognizes as Biosphere Reserves and World Heritage Sites. 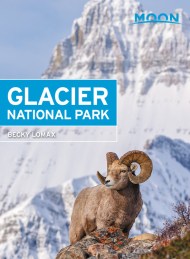 Through lush green parkland and to the top of jagged summits, forge your own path with Moon Travel Guides.