Picking the best of Colombia’s beaches is a tough task. Colombia is the only country in South America with both Caribbean and Pacific coastlines. The Caribbean coast features gems like Parque Nacional Natural Tayrona, where glacier-fed streams flow from snowcapped mountains into the sea. The Pacific coast offers solitude and a chance to spot humpback whales breaching. And, far from the mainland in the Caribbean, the islands of San Andrés and Providencia are a sultry respite.

South of Cartagena is the elongated island of Barú, which is separated from the mainland by the Canal del Dique, an artificial waterway built in 1650 to connect Cartagena with the Río Magdalena. On Barú lies Playa Blanca, a Caribbean paradise of idyllic, white-sand beaches bordering warm blue waters.

The gray, sandy beach in front of beachside-community Taganga’s boardwalk attracts hordes of locals, especially on weekends, but the best beaches are outside of town. Playa Grande, northwest of town, is the best of the bunch, and it is one of the closest to Taganga. It costs COP$10,000 round-trip to get there by boat. To arrange for boat transportation, just head to the beach in front of the promenade or at La Ballena Azul. There are always boaters waiting for customers. There’s a path to Playa Grande from Taganga, which takes 15 minutes to walk. Check with your hotel whether it’s open and passable.

The beaches in Parque Nacional Natural Tayrona are spectacular, but though the water may appear inviting, currents are deceptively strong, and, despite the warnings posted on the beach, many people have drowned here. Of the park’s 34 beaches, there are only 6 where swimming is permitted. There are no lifeguards on duty in the park, and no specific hours for swimming.

The best swimming beaches are around the Cabo San Juan area, including Arenilla and La Piscina, inviting coves of turquoise waters that are protected by natural rock barriers. It’s a 20-minute walk from Arrecifes to both of those beaches. Cabo San Juan, with a large campground nearby, is a hub of activity in the park. Farther along is a clothing-optional beach, just past Playa Brava. Some of the other beaches open to swimming are in the less-visited western part of the park. Playa Neguanje is accessed by car or taxi (COP$15,000 from Santa Marta) through the Palangana entrance (12 km northeast of Santa Marta). Playa del Muerto (Playa Cristal) is another recommended beach in the same area. It’s more than 20 kilometers (12.5 miles) from the park entrance to the beach.

Swaying coconut palms and uncrowded beaches: That’s what the Caribbean is all about, isn’t it? And at Palomino that’s exactly what you get. This town has become quite a popular destination, particularly with backpackers. Caribbean currents can be frustratingly strong here, but the cool waters of the nearby Río Palomino flowing down from the Sierra Nevada de Santa Marta are always refreshing and much more hospitable. Palomino is a good stop to make between Santa Marta and desert adventures in the Alta Guajira.

South of Cartagena, the Golfo de Morrosquillo is a broad, 50-kilometer-wide (31-mile-wide) inlet. Largely unknown to international visitors, the gulf’s easternmost shore is home to the beach community of Tolú, which is popular with vacationing Colombian families. Tolú is best described as sleepy. Here, locals get around on foot or bici-taxi (bicycle cab), and it’s hot and humid year-round.

The easiest and least expensive way to spend some time on the turquoise waters of the Golfo de Morrosquillo and relax on a tropical white-sand beach is to visit the Islas de San Bernardo. These islands, located about 16 kilometers (10 miles) offshore, are part of the Parque Nacional Natural Corales del Rosario y San Bernardo, although the islands have been privately developed.

The fishing community of El Valle to the south of Bahía Solano is authentic if grubby, with wooden houses lining unpaved (often muddy) streets. Just outside of town, about a 15-minute walk north, is Playa Almejal, a broad beach with hotels set back against the jungle. The beach is home to thousands of cangrejos fantasmas (ghost crabs) scurrying about—at a speed of up to 20 kilometers (12 miles) per hour. The graysand beaches are often covered with driftwood, but during the spectacular sunsets, the pastels of the sky are perfectly reflected on the wet sands. The water is great for jumping in the waves, bodysurfing, and surfing.

Some of the best beaches on San Andrés include Spratt Bight, near the Centro in front of the pedestrian walkway; San Luis, near Chammey Marina Cocoplum; Bahía Sonora (near Rocky Cay) beaches; and the Parque Regional Johnny Cay. Out of all of these, the beaches on Johnny Cay, the island off Spratt Bight, are some of the most popular. During peak tourist seasons, on weekends, and on holidays, they get very crowded.

To get to Johnny Cay, you must take a lancha (boat) from Spratt Bight on a quick 15-minute ride. There are always boats (owned by individuals, not organized tour companies) at the ready at Spratt Bight. To arrange a trip, your negotiating skills will be put to the test. Hiring an individual boat can cost up to COP$200,000. The inexpensive option is to take a day tour (COP$20,000). These leave from Spratt Bight by 9:30am every day of the year, returning at around 4pm.

In the late afternoon, Johnny Cay clears out, but you can stay until almost 6pm when the last boats leave. It’s nice to be one of the last visitors on the island as the sun begins its descent. There are no accommodation options on the island, but there are coco loco stands aplenty and some restaurants serving the usual fried fish fare. While there, take a walk around the entire island, where flocks of birds are likely the only company you’ll have. It takes about 15 minutes.

On the eastern side of San Andrés, the beaches at San Luis and Rocky Cay have easy access and great food options. It’s possible to wade through the shallow waters to Rocky Cay.

The best beaches on Providencia can be found generally on the western side of the island. From Manchineel Bay (Bahía Manzanillo) on the southern end to Allan or Almond Bay in the northwest, they are each worth exploring, if you have the time. On these beaches, the waters are calm, the sand golden, and there’s always a refreshing breeze.

Manchineel Bay (Bahía Manzanillo), home to Roland Roots Bar, is an exotic beach where you can relax under the shade of a palm tree. (Be careful of falling coconuts.) In Southwest Bay (Bahía Suroeste), there are a couple of hotels and restaurants nearby, and you can sometimes see horses cooling off in the water or people riding them along the shoreline. The beaches of Freshwater Bay are very convenient to several hotels and restaurants.

The beach at Allan Bay (or Almond Bay) is more remote. It’s notable for its large octopus sculpture on the side of the road (can’t miss it) and nicely done walkway down to the beach from the ring road. The beach area is a public park, and there is a snack bar and stand where you can purchase handicrafts. You’ll have to either drive to this beach or hitch a ride from a taxi.

A couple of coves on Santa Catalina have some secluded beaches on the path to Morgan’s Head, and they offer snorkeling opportunities as well. 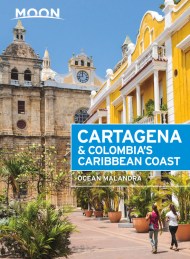