It’s easy to forget the pandemic up here. Each morning as I descend the steps from the Citadella at the top of Gellért Hill, I pass through wooded paths with aerial views of Budapest’s most famous landmarks in the distance: the grand Habsburg Royal Palace of Buda Castle, the spires of the Hungarian Parliament, the stone Chain and green Liberty Bridges, the dome of St. Stephen’s Basilica and the Danube River as it curves into the distance. The paths wind past lilac bushes, almond trees, and hawthorn trees in bloom. Birds rustle in the bushes looking for twigs to build their nests, and the sun dapples the river in strands that ripple golden in the morning light.

On March 28, the Hungarian government put in restrictions for residents to only go out for essentials and stay close to home. At the time of writing, solitary exercise and walking were still permitted. So, as a resident of the XI District, I created a new routine: I get up at 6am, get out the door by 7am, and hike the 770 feet up to the Citadel at the top of Gellért before I get back home before 9am, so I’m in front of the computer when my “office” work begins.

I always took this hill for granted. Since the pandemic, it’s become a place where I can catch a glimpse of the streets I used to rush through on my way to meet people or go to some event or that spot the banks of the Danube where I used to drink wine with friends on hot summer evenings. The whole city is visible from above, yet while everything is so near, it feels so far away.

Gellért Hill has numerous stories to tell. On the surface, it’s a refuge, a quiet place bursting with nature, but history, on the other hand, paints a complex and bloody picture. The hill gets its name from St. Gellért, Gerard Sagredo, a Venetian bishop who came to Hungary in the 11th century. According to legend, Pagan tribes threw him from the hill in a spiked barrel during a revolt.

For centuries before Christianity, the hill was a sacred place for the Celtic tribes. The ruins of an Iron-Age fort slumber below today’s Habsburg Citadel. The Celts, and later a hermit called St. Ivan, bathed in the healing waters of the muddy marsh where the baths now stand.

Fast forward a few centuries from the 1520s to the 1770s when a darker legend spun around the hill. Rumors circulated the city of the mysterious witches who danced under the moonlight and performed rituals to Lucifer. However, these gothic stories have their roots in the over 2000 witch trials of the time. Witchcraft was mostly an excuse to dispose of difficult or independent women, like healers. These women were used as scapegoats for bad a drought and executed by burning.

In the 18th century, lush vineyards covered the hillsides of Gellért. A few street names exist to this day peppered with names hinting to their past, like Szüret (Harvest) or Serleg (Goblet), but the vineyards are gone after the phylloxera epidemic wiped out the vines.

A Hill of Many Paths

Gellért hill rises above the Danube in Buda, Budapest’s western bank of the river. The dolomite hill backs onto the XI District (Budapest is divided into 22 neighborhoods known as districts), where the side streets jutting off from trendy Bartók Béla Boulevard slope up its sides.

There are countless paths leading to the top of Gellért Hill. Most visitors ascend the steps going up from the Rudas Baths, passing an artificial waterfall, towards the colonnaded statue of St. Gellért. Other visitors follow the route going up from the Gellért Hotel and Thermal Baths on the southern slopes. I like to take the back way from Móricz Zsigmond körtér, which takes you through residential streets lined with villas and up many stairs.

You can see the Citadel from most places with a view in the downtown part of the city. The curved stone fortress of the Citadel dates back to the mid-19th century and was built by the Habsburgs. The main landmark here is Budapest’s own Statue of Liberty—no, it’s not a communist rip off of “that one,” but a symbol of liberation from German occupation—on its southern point. A lady in bronze towers above Budapest stretching her arms up, holding a palm leaf in her hand, and has become an iconic figure on the city’s skyline. The statue dates back to 1947 and is one of the few communist statues in Budapest that hasn’t been interned in Memento Park, an outdoor museum and a cemetery for communist sculpture.

From the Statue of Liberty, the most scenic route is to follow the steps down from the statue’s base. This descent will take you past lookout points with the best views over the city, hidden paths, and benches where you can enjoy the sun in social isolation. A labyrinth of interconnected gravelly paths lead down past the rocks towards the Gellért Hotel and the Thermal Baths.

As Above, So Below

You may spot a few doors set into the face of the rock stroll along the base of the hill by the Danube. They lead to a 1-kilometer tunnel running between the Gellért Thermal Baths and the Rudas Baths. The inside of the tunnel is dark and dust dances in the artificial light. Pipelines coat the walls ferrying water back into the baths from the wells that plunge deep into the Earth’s crust. It’s warm down here, and there is a strange feeling that there is more than we can see. Just as above, and so below, Gellért is a hill of many pathways.

The Story of the Cave Church

When there isn’t a pandemic, you can visit the Cave Church, which is open to the public, to catch a glimpse of this subterranean world.

Saint Iván, a hermit from the Middle Ages, lived in this particular cave. One story says he healed the sick using the thermal water from a nearby muddy lake. This lake is said to have become the famous Gellért Baths in the early 20th century. However, the cave he once inhabited continued its role as a home. In the 19th century, a poor family moved into the complex, and by the 1920s, Pauline monks converted the cave into a chapel and a monastery. This is what we see as the Cave Church today. In the 1950s, the communists walled up the entrance with concrete, which came down in 1989, a few months before the destruction of the Berlin Wall. Although tourists can visit this curious church, it still hosts regular masses for nearby Catholics.

I never thought it was possible to have a love affair with a place before the pandemic. Strolling the many pathways of Gellért Hill, through its parklands and past the old villas that back onto it, I feel the history and nature of the hill resonate with each step, whether it’s the legend of witches brewing in the air, the hidden caverns burrowed below, or just the amazing views over the city. When the lockdowns lift and you find yourself back in Budapest, I invite you to hike up the paths to this mysterious and scenic hill. 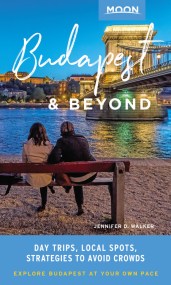 From soaking up Budapest’s poignant history and vibrant nightlife to soaking in thermal baths, savor one of Europe’s most stunning cities with Moon Budapest & Beyond.