Vancouver is a walkable city, with a compact downtown, easy-to-navigate neighborhoods, and plenty of natural attractions close to its urban core. Whether it’s a bright sunny day, or a misty afternoon, you can find a walk that’s right for the weather and your mood.

Put on your walking shoes, and start with these suggestions for Vancouver’s best five urban walks.

Vancouver’s most scenic walking route is the 5.5-mile (9-kilometer) Seawall path the circles the perimeter of Stanley Park. Enter the park near Georgia and Denman Streets, and keep the water on your right as you walk, taking in the views across Burrard Inlet to the city skyline and North Shore Mountains.

Stop to see the collection of totem poles at Brockton Point. At one point, you’ll pass under the Lions Gate Bridge—a dramatic setting for photos. As you come around to the park’s west side, you’ll see the landmark Siwash Rock jutting out of the water. Take a rest at Third Beach (it’s a good spot for a picnic), then continue walking past Second Beach and English Bay. You’ll exit the park near the corner of Denman and Davie Streets, where you’ll find lots of spots to refuel over drinks or a meal.

While most visitors stick to the Stanley Park Seawall, plenty of walking paths crisscross the park’s quiet interior, too, taking you deep into the old-growth forest. The Rawlings Trail parallels Park Drive on the west side of the park and leads you past the Hollow Tree, the 42-foot-tall (13-meter) remains of a massive cedar. Another wooded trail is the Tatlow Walk, which cuts across the southwest corner of the park, between Third Beach and Lost Lagoon. Check the City of Vancouver’s online trail map (PDF) before you set out.

If you prefer to explore with a guide, book a 90-minute “Talking Trees Walk” with native-owned eco-tourism company, Talaysay Tours. As you stroll the secluded trails and around a beaver pond, your guide will identify local plants and explain their uses for food, teas, and medicine. You’ll learn about the park’s long heritage as the traditional territory of local First Nations, too.

The Seawall isn’t just in Stanley Park. This path extends along the False Creek Waterfront connecting English Bay Beach, Yaletown, the Olympic Village district, and Granville Island, and continues west to Kitsilano Beach. Wander along the water for as long as you like, and if you get tired, catch the Aquabus or False Creek Ferries, the cute little boats that shuttle across False Creek.

On the south side of False Creek, near the Olympic Village, snap photos of the downtown skyline and of landmarks like Science World’s geodesic dome. At Granville Island, head for the Public Market, where there are plenty of food and drink options. If you’re not tired yet, keep walking through Vanier Park all the way to Kitsilano Beach, where you can sit on a giant log and watch the sunset.

Vancouver’s craft beer scene has taken off, with more than two dozen microbreweries in the city and even more in the surrounding suburbs. The partly industrial, partly residential East Vancouver neighborhood, loosely bounded by Clark Drive, East 1st Avenue, Victoria Drive, and Powell Street, is perfect for a brewery crawl.

Circle back to Franklin Street where Callister Brewing, Canada’s first “collaborative brewery,” not only sells and serves their own beer but also teams up with additional brewers who use the facilities to make their own beers. Hungry? Continue east, then turn right (south) onto Commercial Drive, which is lined with cafés and eateries, between Venables Street and Broadway.

Start at the corner of Broadway and Main; there’s a cluster of shops just south of this busy intersection. Continue south on Main, stopping for coffee at Forty Ninth Parallel Coffee Roasters.

More serious shopping starts along Main Street between 20th and 30th Avenues. Vancouver Special is an emporium of cool designs, from Scandinavian textiles to Japanese ceramics to Vancouver-made objects. Front & Company lures the style conscious with its large stock of vintage, designer consignment, and smart new clothing, while across the street, Barefoot Contessa carries “all things lovely,” including frilly, flouncy fashions and vintage-inspired jewelry.

Nostalgic for the days of handwritten letters? Stop into the Regional Assembly of Text, which stocks cards, journals, and anything to do with correspondence. Pick up a postcard, where you can jot down some notes from your urban wanderings, a perfect souvenir of walkable Vancouver. 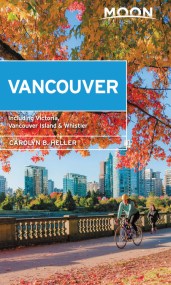 Set on the edge of the Pacific, with mountains silhouetting skyscrapers, Vancouver teems with culture and life.