If you look at a map of South Maui, you’ll notice that much of it actually faces west. This means that South Maui can get waves at any time of year. The southwest swells of summer that bring the best waves, but large northwest winter swells can also wrap into select areas to provide the occasional out-of-season surf. If you’re a complete beginner, the only spot in South Maui you should attempt to surf is The Cove in South Kihei, but if you’re an intermediate or advanced surfer, there are other spots to check out.

Ma‘alaea is one of the few spots on Maui that actually faces almost due south, which means that summer is the only time there will be waves.

The most consistent wave in Ma‘alaea is a spot known as Off the Wall. This is an A-frame, shifty peak that breaks directly in front of the harbor wall, and you can usually only surf here in the morning hours before the afternoon trade winds start howling. To access Off the Wall, park in the dirt parking area at the end of the breakwall ($0.50 per hour), and paddle to the shifty peak—which definitely beats jumping off the wall. Expect short but fun rides, and while it isn’t the best break in all of South Maui, it’s at least a nice place to get wet.

Half a mile (0.8 km) up the highway in the direction of Lahaina is McGregor Point, the fastest right-hand point break in the world. Although McGregor’s rarely gets bigger than head-high, the spot can offer a long wave and is best in the afternoon, when the wind comes up. Parking for McGregor’s is in a dirt lot on the road heading toward the lighthouse. Be careful when pulling off the highway as it is a difficult turn. . To get down to the shore, you have to clamber down a steep and narrow trail, which can be tough if you’re surfing with a longboard. McGregor’s only breaks on the biggest of south swells, but is an island classic when it does.

The surf epicenter of Kihei is The Cove, at the southern end of Kalama Park, where all of the surf schools give lessons. While the waves are gentle, the downside is that it can get crowded. On some days you’ll swear you could walk on water across all of the longboards crammed into the small area, but in the early morning hours, before all the surf schools show up, this is still a fun, albeit small, wave. If your goal in Hawaii is to try surfing for the first time, this is where to come.

For more advanced surfers, the best wave in Kihei is an A-frame that breaks next to the Kihei Boat Ramp. This is a fickle wave that needs a big southwest or west swell to start working, and you need to be cautious of the boat traffic coming in and out of the harbor area. Access can be tricky, since you’re asked to not walk in the sand dune area that runs along the shore. If you’re on a longboard and are up for a paddle, you could always paddle from the far southern tip of Kamaole III Beach.

Shortboarding in Kihei can be found at Sidewalks on the south-central end of Keawakapu Beach. This is a beach break that offers a fast wave, and the vibe here isn’t nearly as localized as at the boat ramp or farther south. Nevertheless, it’s still an intermediate wave that isn’t suitable for longboards or beginners. Parking for Sidewalks is at the public lot on the corner of Kilohana Drive and South Kihei Road.

Rental Shops and Schools in Kihei

In the area surrounding The Cove there are five or six operators crammed into the same city block. Even with the wide selection, it’s best to make a reservation. Nearly all lessons take place in the morning between 8am and noon, before the trade winds fill in, and all operators offer standard two-hour lessons. If you’ve moved past the phase of learning how to pop up and ride straight, most operations also offer “surf safaris,” where they act as your personal surf guide for the day.

On the north side of Mokapu Beach, Stouffer’s is a local A-frame peak for intermediate shortboarders. It can pick up southwest swells in summer and large west swells in winter. Parking is at the south lot of Keawakapu Beach or in the public parking at the bottom of Ulua Beach Road.
On the southern end of Wailea is a punchy little left on the southern end of Polo Beach that’s good for intermediate shortboarding.

There aren’t any beginner surf breaks in Makena. If you’re an intermediate or advanced surfer and have always wanted to surf naked, try Little Beach, a left that breaks on large southern swells. To reach the wave, you need to carry your board up and over the hill that separates Little Beach from Big Beach. 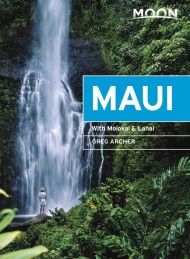