While many national parks struggle with their fates as islands of wilderness surrounded by a more developed world, Isle Royale represents the opposite scenario. It has the advantage of a much larger buffer zone protecting it from outside encroachment and influence. As a result, it’s one of the most closely managed holdings in the national park system and presents some unique opportunities for conservation. Isle Royale is one of the few parks that regulates the number of visitors who pass through its gates. Though logistics have done a sufficient job of keeping numbers down thus far, the National Park Service could reduce the number further by cutting back on ferry service or on the number of campsites.

Limited access also allows the National Park Service to enforce rules more effectively. Dogs, for example, are not allowed on the island for fear they might bring rabies and other diseases to the island’s wolf pack. The National Park Service also takes great pains to preserve the island’s backcountry solitude, with a park brochure reminding hikers to “refrain from loud conversation,” “avoid songfests,” and “select equipment of subtle natural tones rather than conspicuous colorful gear.”

Getting to Isle Royale

If getting there is half the fun, you’ll be very excited by the time you arrive at Isle Royale. Travel to the island is not particularly convenient or cheap, which probably accounts for average visitor stays that are considerably longer than most other national park destinations. The average visit to Rocky Mountain National Park is a few hours; to Isle Royale, three days, including day trippers who flow off the ferry, wander around the harbor for a few hours, and leave that afternoon.

Many, however, come to appreciate even the trip to and from Isle Royale, a mental decompression chamber of sorts that eases the passage between island wilderness and the civilized world.

Your options for travel to Isle Royale are seaplane, ferry, or personal boat.

The National Park Service operates the largest ferry, the 165-foot Ranger III, which has been in service since 1958. It departs from Houghton twice a week, at 9am Tuesday and Friday, from late May to mid-September, for the six-hour passage to Rock Harbor. The one-way cost is $63 adults, $23 ages 6-12, free under age 6. Canoes and kayaks are an additional $22-50 if they’re longer than 20 feet or weigh more than 90 pounds. Make reservations through the national park (906/482-0984, www.nps.gov/isro).

If you’d rather see more of the Keweenaw and spend less time on the ferry, drive another hour up the peninsula to Copper Harbor, where you can catch the Isle Royale Queen IV for a three-hour trip to Rock Harbor. It operates from mid-May through the end of September, with a varying schedule, adding additional departures as needed in July and August. The one-way cost is $65 adults, $33 under age 12. Canoes and kayaks are an additional $25. The Isle Royale Queen IV is highly reliable and has happily surprised weary backpackers by showing up to retrieve them on even the stormiest of days. But the ship richly deserves its nickname, “The Queasy.” In heavy seas, its hull can rock and roll at a pretty good pitch. To check the schedule and make reservations, contact the Isle Royale Line (906/289-4437).

A third and fourth ferry run from Grand Portage, Minnesota. The 65-foot MV Voyageur II (outbound Mon., Wed., and Sat., inbound Tues., Thurs., and Sun.). Outbound departures are at 7:30am central daylight time outbound and at 8am inbound. On its way to Rock Harbor, it circumnavigates the island, offering drop-off and pickup service along the way. This makes for a slow but interesting trip. Rates start at $71 one way, but vary depending on your selected destination. Voyageur II can also carry canoes and kayaks for an additional $37 each way.

Seaplane service by Isle Royale Seaplanes (21125 Royce Road, Hancock, 906/483-4991, $320 pp round-trip, $220 pp one-way) in Hancock is the most expensive and usually the quickest way to the island, although the 35-minute flight can often be delayed by wind and fog. The plane, a Cessna 206 amphibious seaplane, flies Thursday to Tuesday and can carry up to four passengers. The plane cannot carry stove fuel, but you can purchase it on the island at the park store. Luggage is limited to 50 pounds per passenger.

Arriving by private boat is popular in midsummer—perhaps a bit too popular for those who treasure the island’s solitude and resent the whine of powerboat engines. The Rock Harbor and Windigo marinas offer docking and refueling for powerboats and sailboats; boats also are allowed to drop anchor in a secluded bay overnight and save the marina fee. Protected harbors are plentiful on the east end of the island, although most remain exposed to an east wind, but are nonexistent on the west end. Every boat arriving at the island must first stop at a ranger station in Windigo or Rock Harbor to obtain a permit and pay the park user fee.

Those with boats under 20 feet should not to attempt a Lake Superior crossing. Even if you have a larger vessel, consider the passage only if you possess strong navigation skills and a good marine radio. Lake Superior has many ocean-like characteristics, and storms can appear with little notice.

Isle Royale was one of the first national parks to charge a park user fee, currently $7 pp per day. If you’re traveling to the island by ferry or seaplane, the concessionaire will collect your fee. If you’re traveling by private boat, you can pay at the ranger station at Windigo or Rock Harbor, or at the Houghton Visitors Center prior to your departure.

The National Park Service has long discussed charging admission fees to national parks as a way to compensate for shortfalls in federal funding. In the past, all gate fees were fed back into the federal government’s general treasury, eliminating an incentive to levy a fee. With the new user-fee program, however, 80 percent of the monies gathered is spent at the collecting park. The remaining 20 percent is spent at national parks with priority maintenance projects. In Isle Royale’s case, that means hundreds of thousands of dollars that will be spent maintaining trails and repairing or replacing docks. 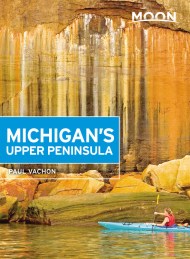