Designated a UNESCO Biosphere Reserve in 1981, the glorious Killarney National Park comprises 102 square kilometers of lakes, mountains, and forest teeming with both indigenous and exotic plant- and wildlife. Killarney is also Ireland’s oldest national park, established in 1932 with the bequest of Muckross Estate from the Bourn family and their son-in-law, Irish Senator Arthur Vincent. The adjacent lands of the former Kenmare Estate, most recently owned by an Irish-American businessman named John McShain, were added to the park in 1989.

Whether you just want a leisurely stroll, an afternoon biking excursion, a paddle to an uninhabited island, or a hardcore mountain-climb, Killarney has boundless opportunities for outdoor recreation. The park encompasses three lakes and four mountains—Torc (535 meters), Mangerton (840 meters), Purple (832 meters), and Shehy (570 meters)—as well as Muckross House and Gardens, Muckross Abbey, and Ross Castle.

Lough Leane (or Lower Lake) means “Lake of Learning,” a reference to the 7th-century monastery founded by St. Finian the Leper on Inisfallen Island. The 11th- to 13th-century Annals of Innisfallen have provided much of what we know of early monastic Ireland; the manuscript is now in the Bodleian Library at Oxford (along with the Book of Glendalough and loads of other Irish biblio-treasures). You can rent a rowboat at the pier at Ross Castle to reach the ruins, which include a 12th-century oratory with a remarkable Romanesque doorway.

The castle itself was erected in the late 15th century by the O’Donoghue Ross chieftains, and in 1652 Cromwell’s forces circumvented a prophecy that the castle would never be taken by land—by having a boat anchored in Castlemaine Harbour transported down the River Laune and set afloat on the Lower Lake. Seeing that the prophecy was about to be fulfilled, the castle’s Irish defenders waved the white flag without further ado. Ross Castle is now furnished with 16th- and 17th-century furniture, and the 40-minute guided tour emphasizes the unhygienic conditions of medieval life. There isn’t so much to see that you should waste an hour inside on a sunny day, but if storm clouds are looming, it’s worth a visit.

Another site of note on the eastern shore of the Lower Lake is the copper mine on a small peninsula just south of the castle (inaptly known as Ross Island), which dates to the early Bronze Age (c. 2000 BC).

Near the park entrance is Knockreer House and Gardens (about half a kilometer west of the cathedral entrance, clearly signposted), former home of the last Earl of Kenmare. The original Victorian manor was destroyed in a fire, and the current edifice dates to the 1950s. It now serves as the National Park Research and Education Centre, which puts on conservation and ecology workshops for students and groups. It isn’t generally open to the public, though the gardens are.

Killarney’s Middle Lake is also known as Muckross Lake. “Muckross” derives from the Irish for “Pig Peninsula” (Muc Rois), so named for the area’s former population of wild pigs. Muckross Lake is encircled by a bike path, but it is essential that you ride in a counterclockwise direction.

An ancient yew tree grows in the cloister of 15th-century Muckross Abbey (4 km south of town off the N71/Kenmare road, 7-minute walk from the parking lot and jaunting car depot, tel. 064/663-1440, 10:30am-5pm mid-June-Aug., free), a romantic sight. It’s possible that the tree predates the monastery, and the cloister was built around it. The abbey has the nefarious Oliver Cromwell—who else?—to thank for its ruined state.

The most popular attraction in the park is the splendid Victorian Muckross House and Gardens, country manor of the Herbert and Vincent families. In anticipation of a visit from Victoria in 1861—and hoping for a title—the Herberts spent most of their fortune doing up the house to impress the queen and her entourage, but the visit lasted only two nights, Albert died a few months later, Herbert never got his title, and they went bankrupt soon afterward. The Vincent family donated the house and grounds to the state in 1932, and it’s been impeccably restored and maintained with 70 percent of the house’s original furniture. Every room is full of stunning art and antiques, with the requisite portraits of anemic white-wigged magistrates and elaborate silver tea services—not to mention the frighteningly vast collection of mounted deer heads (most of them in skeletal form). Admission is through an excellent 45-minute guided tour.

In addition to a deluxe craft emporium downstairs (there are potters, bookbinders, and weavers with workshops on the premises), there’s also a rather posh restaurant with a wine license and views of Torc Mountain and the gardens.

And here’s a fun time-warp experience for the kiddies: Muckross Traditional Farms has three separate, fully functioning farms using technology (if you can call it that) from the 1930s.

West of here, the three lakes converge at the Meeting of the Waters, a popular spot with local anglers. Dinis Cottage, a turn-of-the-19th-century hunting lodge, serves tea and light snacks.

Also clearly signposted across the N71 from Muckross Lake is Torc Waterfall. Tourists frequently brave these slippery rocks in questionable footwear for a snapshot.

Smallest of the three and dappled with “fairy islands,” the Upper Lake lies just west of the Kenmare road (N71), and there is a small car park just south of Ladies’ View. This lookout over Macgillicuddy’s Reeks, Purple Mountain, and the lake below was so named because Victoria’s ladies-in-waiting paused here during the queen’s tour of Killarney in 1861. A walking trail west along the lake’s southern shore leads to Lord Brandon’s Cottage, another über-touristy 19th-century hunting lodge turned restaurant, which is also signposted just before the southern terminus of the Gap of Dunloe.

The national park visitors center is at Muckross House. There is also an information office at the Torc Waterfall near the eastern shore of Muckross Lake.

For a guided walk, contact Richard Clancy, whose guided tours (mostly two-hour walks, but half- and full-day trips can be arranged) cover the history and botany of the park. Tours depart from the gas station opposite the cathedral at 11am daily all year.

Getting There and Around

There are two entrances to the park: one opposite St. Mary’s Cathedral at the end of New Street and the other east of Muckross Lake on the Kenmare road. If you want to see Ross Castle, take the cathedral entrance; otherwise, head down the N71 (a distance of five kilometers, certainly walkable, but get an early start if you want to get as far as the Torc Waterfall).

Cycling is the best way to see the park; rent a bike in Killarney Town. You can also hire a jaunting car with a crusty old local (a “jarvey”), though you’ll cover far more ground hiking or biking. Frankly, this horse-drawn option is the lazy man’s way to see the park, and walkers don’t appreciate having to step around the horse dung all over the roads. All that said, it’s actually the most practical option for families with small children; a one-hour tour for four people will run you roughly €40, €60 for two hours, though the price is negotiable. There’s a depot at Kenmare Place in the center of town and another on the N71 at the Muckross entrance to the park (where you can also park your car). 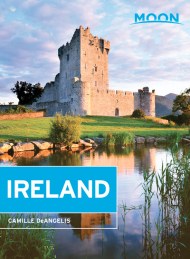 In its people, legends, and landscapes, Ireland is a living, breathing fairy-tale that ignites the imagination in a way few other places can.