There are several Underground Railroad sites in New York State where visitors can learn about the journeys of the estimated 30,000 people who passed through the Buffalo-Niagara corridor. The collection of towns along the U.S.-Canada border served as one of the last stops for those on their way to Canada from the early 1800s to the Civil War’s end in 1865.

The small, modest church of Michigan Street Baptist Church (511 Michigan Ave., Buffalo) was built in 1845. It hosted many of the abolition movement’s luminaries, including Frederick Douglass, W. E. B. DuBois, and Booker T. Washington, and functioned as a station on the Underground Railroad. Though hours are irregular, visitors who happen to get lucky will be treated to a rich oral history narrated by clergy.

St. John’s AME Church (917 Garden Ave., Niagara Falls) was one of the first African American churches founded in Niagara County. Fugitive slaves could see the beckoning lights of Canada and freedom from the church’s hillside location.

The Niagara Arts and Cultural Center (1201 Pine Ave., Niagara Falls) has a permanent Freedom Crossing Exhibit that offers an introduction to the Buffalo-Niagara region’s geographical and sociopolitical positions in the abolition movement. Guided personal and group tours are available; call ahead to make arrangements.

Housed in what was once the U.S. Customs House and Post Office, the Niagara Falls Underground Railroad Heritage Center (2245 Whirlpool Street, Niagara Falls) was an important site for freedom seekers crossing into Canada. Restoration of the building was recently completed, and it is now the main interpretative center for the Niagara Falls Underground Railroad Heritage Area. A temporary exhibit greets visitors in the Amtrak station next door while a permanent exhibit is being developed.

Located midway between Niagara Falls and Lockport, the Thomas Root Home (3106 Upper Mountain Rd., Pekin) contains a trapdoor leading to a 5-by-10-foot cellar. Here “volumes bound in black,” as the coded messages once read, spent the night before being driven to the border, hidden beneath piles of vegetables. The house is now privately owned, but the station is set amidst a small row of pine trees accessible to the public. 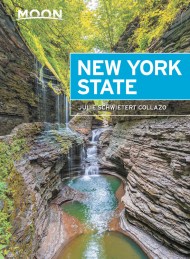 From the iconic NYC skyline to the natural beauty of the Finger Lakes, Moon New York State reveals the best of the Empire State.