Guatemala’s national instrument is the marimba, a huge wooden xylophone with probable African origins. You’ll often hear marimba in popular tourist regions such as Antigua, where its cheerful notes can be heard emanating from garden courtyards housed in the city’s larger hotels. Pre-Columbian musical instruments consisted largely of drums, wooden flutes, whistles, and bone rasps. An excellent place to check out the history and origins of Guatemala’s highland Mayan musical traditions is Casa K’ojom, just outside Antigua in Jocotenango.

It’s also not uncommon to hear music with Mexican influence in Guatemala, with the occasional mariachi band contracted to liven up a birthday party. Tejano and ranchera music can often be heard. You’ll also hear American rock bands here and there, sometimes on bus rides, though the sounds favored by bus drivers seem to have gotten stuck somewhere around 1984.

On the Caribbean Coast, the Garífuna population tends to favor the mesmerizing beats of punta and reggae, with variations including punta rock and reggaeton, English-Spanish rap laid over slowed-down Caribbean-style techno and reggae beats.

Guatemala’s first literary figure was Jesuit priest and poet Rafael Landívar (1731-1793). A native of Antigua, his most well-known work is Rusticatio Mexicano, a poem describing rural customs of the times. Landívar was forced to leave Guatemala in 1767 when his order was expelled from the Americas by the Spanish Crown.

The country’s best-known writer is Miguel Ángel Asturias (1899-1974), winner of the 1967 Nobel Prize in literature. His most famous works include El Señor Presidente (1946), about the maniacal dictator Manuel Estrada Cabrera, and Hombres de Maíz (1949, translated as Men of Maize), about the Mayan peasantry. One of the characters in the latter is a guerrilla warrior by the name of Gaspar Ilom, a name that Asturias’s son Rodrigo, influenced by his father’s writings, would appropriate as a pseudonym while leading one of the guerrilla factions comprising the Guatemalan National Revolutionary Unity (URNG). His other well-known works include El Papa Verde (The Green Pope, 1954, about the United Fruit Company) and Weekend en Guatemala (1968, about the 1954 coup that ousted Jacobo Árbenz Guzmán).

Modern Guatemalan authors of note include Francisco Goldman, author of several novels, including The Long Night of White Chickens, which takes place mostly in Guatemala, The Ordinary Seaman (1997), and The Divine Husband (2004). Arturo Arias is another modern-day author known for having written the screenplay for the movie El Norte and the book After the Bombs, chronicling the Arbenz period and the aftermath of his overthrow. Víctor Perera has written several excellent books on Guatemalan culture and history, including Unfinished Conquest (1993) and Rites: A Guatemalan Boyhood (1986).

Guatemala’s rich history in the visual arts dates to pre-Columbian times, with the painting of exquisite murals and the carving of stelae by the Mayans. The colonial period also left a substantial artistic legacy, mostly by anonymous artists. An exception is the work of Thomas de Merlo (1694-1739), whose paintings can still be seen in Antigua’s Museo de Arte Colonial. Sculptor Quirio Cataño carved the Black Christ of Esquipulas in 1595, now an object of much veneration for pilgrims from all over Central America.

More recently, Kaqchikel painter Andrés Curruchich (1891-1969) pioneered the “primitivist” style of painting from his hometown in Comalapa, Chimaltenango. The currents of indigenismo ran strongly throughout the 20th century and were marked by an often-romanticized portrayal of indigenous culture, as evidenced by the murals found in Guatemala City’s Palacio Nacional de la Cultura, which are the work of Alfredo Gálvez Suárez (1899- 1946). Also in this vein was sculptor Ricardo Galeotti Torres (1912-1988), whose works include the giant marimba sculpture found in Quetzaltenango and the Tecún Umán statue in the plaza of Santa Cruz del Quiché.

Perhaps Guatemala’s best-known visual artist, Carlos Mérida (1891-1984) was a contemporary of Pablo Picasso, whom he met while studying painting in Paris between 1908 and 1914. His indigenista art predates the work of Mexican muralists the likes of Diego Rivera by about seven years and sought to unify European modernism with themes more specific to the Americas. Mérida’s work exhibits three major stylistic shifts throughout the years: a figurative period from 1907 to 1926, a surrealist phase from the late 1920s to the mid-1940s, and a geometric period from 1950 until his death in 1984. Many of his works can be seen in Guatemala City’s Museum of Modern Art, which bears his name. Mérida’s murals also grace the walls of several Guatemala City public buildings.

Another artist whose work adorns Guatemala City architecture is sculptor and engineer Efraín Recinos, designer of the city’s Centro Cultural Miguel Ángel Asturias. A large Recinos mural composed of blue and green tiles was formerly housed inside La Aurora International Airport but was recently demolished as part of the airport renovation project. The large, white sculptures lining the airport’s exterior facade were also created by Recinos and have been restored and incorporated into the terminal’s new design.

In March 2007, Guatemala City hosted a sculpture festival with the participation of 12 internationally acclaimed artists working during a two-week period to create unique art pieces from blocks of marble. It was the first event of its kind held in Central America. The sculptures are now part of the city’s artistic legacy and can be found along the boulevard connecting the international airport to Bulevar Liberación.

In addition to the well-documented architectural legacy of the Maya, Guatemala is also known for its baroque architecture, found mostly in Antigua and Guatemala City cathedrals and government buildings. This style of architecture is a Spanish adaptation to local conditions, marked by the prevalence of earthquakes, with squat, thick-walled structures designed to weather numerous tremors throughout the years. Architecture in rural towns and villages tends to be rather functional, with a recent trend toward grotesque multistory concrete buildings replacing more traditional construction. Classic forms of rural architecture consist (or consisted) largely of whitewashed adobe houses with red-tile roofs.

Guatemala City has its fair share of assembly- line high-rise condominiums, though it also has some noteworthy modern architecture. If you have an interest in this topic, a recommended book is Six Architects (Ange Bourda, 2002), filled with wonderful color photographs chronicling the work of six Guatemala City architects who merged into a single firm and are responsible for several of the city’s nicest buildings.

In April 2007 the Parisian Grande Arche de la Défense played host to a fascinating 48-image exhibit by photographer Ange Bourda, which chronicled the rich history of Guatemalan architecture from pre-Columbian times to the present.

Guatemala has its very own cable TV channel, Guatevisión, which can be seen in the United States. It features a morning show based in Guatemala City as well as some fairly humorous entertainment programs that provide a glimpse of the nightlife and outdoor recreation scene throughout the country. Guatemala even had a celebrity newscaster of sorts, CNN’s former Mexico City bureau chief Harris Whitbeck, who reported events around the world in English and Spanish. One of his more recent projects is a local TV show, Entrémosle a Guate (Let’s Get in on Guate), with profiles of everyday Guatemalans who make the country a special place. He now has his own production company based out of Miami and is the host of the Spanish version of The Amazing Race.

As for movies about Guatemala, El Norte (1983, directed by Gregory Nava) is a classic tale of Guatemalan immigrants fleeing the civil war during the 1980s. More recently, in the summer of 2006, Antigua was the scene of on-location shooting for Looking for Palladin, a film about a young Hollywood go-getter who finds himself in Guatemala. Many folks in Antigua are hoping the film will open doors for more movies to be filmed in Guatemala. 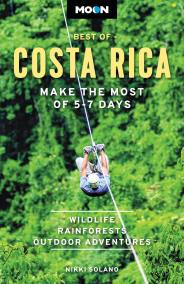 From waterfalls and cloud forests to white sand beaches, a week of pura vida awaits with Moon Best of Costa Rica.