Famous for their warm hospitality, natural beauty, and small-town charm, these are the towns that make lasting impressions on Pacific Crest Trail hikers.

Mount Laguna, CA: Nestled in a sparse pine forest atop a dramatic mountain ridge, the tiny community of Mount Laguna defies Southern California stereotypes. At an elevation of more than 6,000 feet, this ridgeline habitat blends alpine and desert environments; the landscape is peppered with Jeffrey pine trees, prickly pear cactus, mistletoe, and manzanita. The area features gorgeous scenery and abundant wildlife, including a number of bird species that flourish in post-burn environments.


Idyllwild, CA: Catch live music every night of the week in this artsy mountain town, which is also home to fantastic restaurants and great shops. Trails into Mount San Jacinto State Park depart from the edges of town, leading to the PCT and the top of Mount San Jacinto. If you find yourself in town on a Tuesday, stop at Los Gorditos for Taco Tuesday specials. With authentic street-style tacos for just $0.99 apiece, you can fill your belly for just a few bucks.

Lone Pine, CA: Find yourself transported to the Wild West in Lone Pine, where you can explore the filming locations of hundreds of movies and TV shows. About 12 miles west of Lone Pine lies Whitney Portal and the trail to Mount Whitney, the tallest peak in the continental United States. Although Mount Whitney isn’t on the PCT, many hikers choose to spend a day summiting the peak, while some descend from the mountain to rest and recharge in Lone Pine.

Bridgeport, CA: Without the crowds of the more popular areas farther south, Bridgeport is a no-frills town in the Eastern Sierra with craft beer, nice views, and two beautiful natural hot springs. It makes a convenient base camp for hikers who want to explore 9,600-foot Sonora Pass, where the Pacific Crest Trail traverses the Emigrant and Carson-Iceberg Wilderness areas. Volcanic ridges, sparse vegetation, and rocky outcroppings dominate the terrain in this region.

Truckee, CA: Not far from Lake Tahoe, this sophisticated mountain town has fantastic restaurants, great shops, and plenty of opportunities for year-round outdoor recreation at nearby Donner Lake and Donner Summit. Be sure to get some artisan ice cream cone at Little Truckee Ice Creamery or go straight to Old Town Tap for swanky cocktails and gourmet pizza.

Mount Shasta, CA: The city of Mount Shasta sits on the western base of an enormous dormant volcano of the same name, the second-tallest in the Cascade Range behind Washington’s Mount Rainier. In 2018, Mount Shasta became the first official Pacific Crest Trail Town. Castle Crags State Park is nearby, and the town is surrounded by some of the most rugged terrain in Northern California. Mount Shasta itself, a 14,180-foot volcano, is visible from about 500 miles of the PCT.

Ashland, OR: Both sophisticated and rural, Ashland is a small city set in the Siskiyou Mountains near the Oregon-California border. The town’s motto, “As you like it,” is a reference to the town’s annual Shakespeare festival. The catchphrase also suggests that there’s something for everyone in Ashland, and it’s true: great restaurants, terrific shopping, world-class theatre, beautiful parks, relaxing spa experiences, and easy access to outdoor activities in the surrounding mountains.

Cascade Locks, OR: Cascade Locks is an iconic destination on the PCT—the place where Oregon meets Washington in the dramatic Columbia River Gorge. Located less than an hour drive from Portland, it’s also a popular destination for urbanites eager to escape the city and enjoy some of the best natural scenery in the state. Nearby hikes lead to waterfalls that tumble hundreds of feet over thickly forested cliffs on their way to the Columbia River.

Trout Lake, WA: Trout Lake is a sleepy rural community in a valley south of Mount Adams. The town’s view of the second-highest peak in the state (one of five active volcanoes in the Washington Cascades) is larger than life. Trout Lake offers a handful of food and lodging options, but outdoor recreation is what draws visitors to the area: world-class hiking, whitewater boating, mountaineering, fishing, and camping are all within a few miles.

Stehekin, WA: With no roads to the outside world, Stehekin is a town at the northern tip of Lake Chelan that can only be reached by foot or by boat. This town offers a wild yet luxurious escape from modern life, with delicious food, well-appointed accommodations, copious camp spots, and miles of hiking trails into the mountains. The Pacific Crest Trail skirts the northern edge of the Stehekin River Valley between Glacier Peak Wilderness and North Cascades National Park. 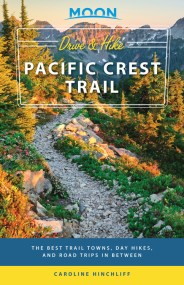 Whether you're stopping for a day trek or taking a weekend getaway, hit the road and hit the legendary trail with Moon Drive & Hike Pacific Crest Trail.