Whether you’re a longtime resident or a first-time visitor to the Great Lakes State, Michigan’s top cultural and natural attractions make the trip well worthwhile. These short itineraries each highlight a section of the state. Explore a section at a time, or link them all together for a road trip throughout the entire state.

If you’ve started your adventure in the Motor City, head about eight miles southwest of downtown to Dearborn, where you’ll find The Henry Ford, a fascinating complex of historical attractions that includes the Henry Ford Museum, Greenfield Village, and the Ford Rouge Factory Tour.

From Dearborn, head west along I-94, through Ann Arbor and Battle Creek. Two notable sights are the W. K. Kellogg Bird Sanctuary near Augusta and the Air Zoo, an enormous complex devoted to the history of aviation in Kalamazoo.

From Kalamazoo, head north on U.S. 131 for about 18 miles and continue on Highway 89 for roughly 33 miles, toward the Art Coast, a cluster of art galleries in and around the towns of Saugatuck and Douglas.

After spending some time amid the area’s shops, restaurants, and inns, drive north on U.S. 31 to the incredible Sleeping Bear Dunes National Lakeshore, a marvelous 35-mile stretch of beaches, dunes, and lakes that lies alongside Lake Michigan and about 174 miles north of Saugatuck.

From the lakeshore headquarters in Empire, head east on Highway 72 for 24 miles to Traverse City, an ideal base from which to explore gorgeous Grand Traverse Bay, popular with boaters and surrounded by several scenic resort towns, golf resorts, and an abundance of wineries that rival California’s Napa Valley.

Expect a 100-mile drive on U.S. 31 from Traverse City, through the towns of Charlevoix and Petoskey, to the amazing five-mile-long Mackinac Bridge, one of the world’s longest suspension bridges. After crossing the bridge and passing through St. Ignace, head north for about 50 miles on I-75 to Sault Ste. Marie, Michigan’s oldest city. Here, you’ll glimpse another engineering marvel, the Soo Locks, through which massive freighters pass between Lakes Huron and Superior. For an up-close view, take a Soo Locks Boat Tour.

Head west along Highway 28 for about 38 miles through the Hiawatha National Forest, then turn north on Highway 123 for another 26 miles until you arrive at Tahquamenon Falls, one of the largest waterfall systems east of the Mississippi. Afterward, continue north on Highway 123 for 25 miles to Whitefish Point, where you’ll find the Great Lakes Shipwreck Museum, the only museum dedicated to the perils of maritime transportation on the Great Lakes.

Roughly 115 miles farther west lies Pictured Rocks National Lakeshore, a fabulous stretch of sand dunes, desolate beaches, sandstone cliffs, and shady forests beside Lake Superior. To get there, take Highway 123 southwest to Highway 28 for 23 miles until you come to Highway 77. From there, head north along Highway 77 for 25 miles until you arrive at Grand Marais, which is the eastern terminus of Pictured Rocks. The national park spans more than 40 miles along the lake, from Grand Marais to Munising.

If you want to venture farther into the wilds of the UP, head west from Munising on Highway 28/U.S. 41 for about 145 miles to the heart of the Keweenaw Peninsula. History buffs will enjoy the Keweenaw National Historical Park. From nearby Houghton, adventurous hikers, backpackers, kayakers, and wildlife enthusiasts can take a ferry ride to Isle Royale National Park, a wild, isolated archipelago in the northern reaches of Lake Superior.

Straits of Mackinac to the Thumb

Once you’re done exploring the Upper Peninsula, head south to Mackinaw City, which lies about 266 miles from Houghton. To get there, take U.S. 41 south through L’Anse, Ishpeming, and finally to Marquette—a distance of 128 miles. A college town with a sophisticated yet “up north” feel, Marquette is a worthy destination in its own right.

From Marquette, take Highway 28 through Munising, Shingleton, and Seney until you come to I-75. Take I-75 south, cross the Mackinac Bridge and you’ll find yourself in Mackinaw City. Board a ferry for Mackinac Island, a charming vacation spot that has long banned automobiles in favor of bikes and horse-drawn carriages. Rife with Victorian mansions, this nostalgic island offers a true step back in time, anchored by the magnificent Grand Hotel, which prides itself as America’s Summer Place.

Back on the mainland, drive south on I-75 for about 58 miles through a cluster of excellent golf courses in the greater Gaylord area, and continue south for roughly 27 miles to Hartwick Pines State Park, home to the largest stand of virgin white pines in the Lower Peninsula.

End your tour of Michigan on a festive note by heading south on I-75 for about 125 miles, toward the Bavarian style town of Frankenmuth, site of German shops and festivals, all-you-can-eat chicken dinners, and a year-round Christmas store. 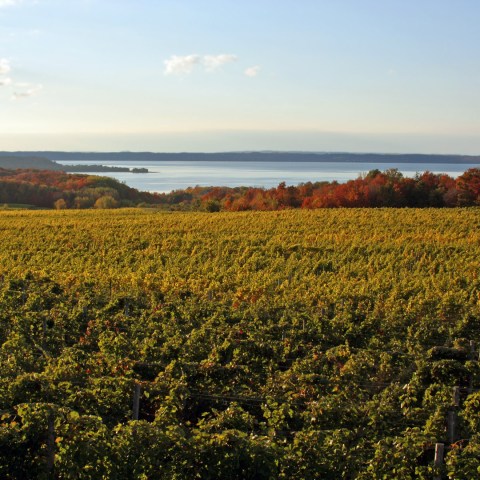 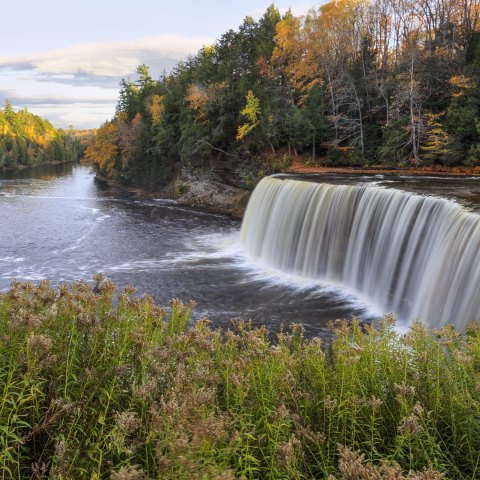