There’s nothing quite like watching live theater, and New York hosts the most diverse offerings in the world. From black-box theaters where all the seats are within spitting distance of the actors to Broadway palaces where film stars and veteran theater actors alike bring to life the biggest shows on the planet, there’s something for every taste. That being said, theater in New York can be expensive—but with a little planning, plenty of discounts are readily available. Here’s how to save on Broadway tickets in New York City.

At any given time on Broadway there are a few shows that are nearly impossible to get tickets for unless you luck into last-minute steals via lottery tickets (or purchase them full-price a year in advance). But there are plenty of other theatrical options. The most famous discount purveyor is the Times Square TKTS booth at Broadway and W. 47th St. Run by the Theatre Development Fund, it offers same-day Broadway and Off-Broadway tickets for up to 50 percent off. It has a play-only line, which cuts down significantly on wait time if that’s what you’re after, and often features high-profile revivals along with new plays. Visit the TDF website to check out current offerings; real-time listings are shown for each TKTS location. Plays are noted with the letter “P.”

If you’re just interested in the shows themselves and don’t need the Times Square TKTS line-waiting experience, head to any of the TDF’s three other locations for shorter queues: South Street Seaport (190 Front St.), Downtown Brooklyn (1 Metrotech Center), and Lincoln Center (61 W. 62nd St.). The first two sell same-day tickets for evening performances and next-day tickets for matinees, while the latter sells day-of tickets for both evenings and matinees as well as next-day matinees. Similar discounts can also be found on websites like Theatermania and apps like TodayTix. The latter offers rush tickets for many shows. For cheap Off-Off-Broadway tickets, you can join TDF for free to access $9 tickets.

A good rule of thumb for Broadway and Off-Broadway shows is to go during previews—before a show officially opens—for the best deals. New York Theatre Workshop sells preview tickets for as little as $25 while the Atlantic Theater Company also offers $25 tickets for preview performances.

Soho Rep sells tickets for select Sunday performances for just 99 cents (purchase in person on the day of), while The Public Theater gives away free tickets for the first preview of each performance and makes $20 rush tickets available for subsequent shows (via a lottery on TodayTix).

For those under 30 or 35, even more deals are available, with many theaters—mainly Off-Broadway—offering discounts to make shows more accessible and enticing to younger people. For example, Roundabout Theatre Company, Lincoln Center Theater, Second Stage Theater, and Manhattan Theatre Club all offer programs through their websites that allow you to purchase tickets in advance for $20-30. Some require enrolling in a free membership. As part of these programs, some theaters also throw an open-bar party for each show’s run, free with a ticket purchase and making for an even more affordable evening out.

For more ideas on the best things to do in New York City, check out: 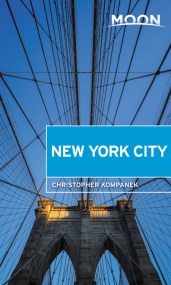 From the corner bodega to the top of the Empire State Building, NYC is overflowing with energy and culture. Experience the city with Moon Travel Guides.