On the eastern Andean slopes, Parque Nacional Los Glaciares comprises over 750,000 hectares, where slowly flowing ice gives birth to clear frigid rivers and vast lakes, interspersed with Magellanic forests, along the Chilean border west and north of El Calafate. A UNESCO World Heritage Site, it’s famous for the Glaciar Perito Moreno, which draws thousands of visitors as well as scientists absorbed in glaciology and climate studies. The northern sector draws those seeking to spend several days in vigorous exercise, for either trekking or the riskier technical climbing.

Hugging the Chilean border, the elongated park stretches well over 100 kilometers from north to south. There are four significant access points, but just two of those get the great majority of visitors.

Since nearly all visitors come to see Glaciar Perito Moreno, most stay at El Calafate, 80 kilometers east by paved highway; the only accommodations closer to the glacier are expensive ranches and lodges just outside park boundaries with small capacities. At the Río Mitre entrance, this main Glaciar Perito Moreno approach, the Administración de Parques Nacionales (APN) collects a US$22 admission fee (payable in pesos only) from nonresidents of Argentina. Lake excursions into the park leave from Punta Bandera, a short detour north from the Moreno Glacier road. Passengers on lake excursions from Punta Bandera must also pay the fee.

The other main access point is the village El Chaltén, 220 kilometers to the northwest by a paved but roundabout route, with abundant accommodations in all categories and easy trail access even for those without their own vehicles. This northernmost sector—a three-hour bus trip from El Calafate by paved highway—attracts hikers and serious mountaineers. Backpackers should note that no campfires are permitted within the park. Carrying a camp stove is obligatory for cooking. This southern approach includes the APN visitors center (tel. 02962/49-3004, 9am-5pm daily, occasionally until 8pm), which has natural history exhibits, provides a decent trail map (scale 1:75,000), and also issues climbing permits (free).

There is additional access to Parque Nacional Los Glaciares at Lago Roca, southwest of El Calafate, and at little-visited Helsingfors, to the northwest. Accessible by gravel road, the Lago Roca sector has campgrounds and some ranch accommodations, but few trails. To the northwest, on the south shore of Lago Viedma, reached from El Calafate by a roundabout combination of paved and gravel routes, the park’s Helsingfors sector has limited but scenic hiking and private accommodations at its namesake lodge. There is no public transportation.

Where a low Andean pass lets Pacific weather systems cross the cordillera, countless storms have deposited immeasurable meters of snow that, over millennia, have compressed into Glaciar Perito Moreno, a rasping river of ice that’s one of the continent’s greatest sights and sounds. Fifteen times during the 20th century, the advancing glacier blocked Lago Argentino’s Brazo Rico (Rico Arm) to form a rising body of water that eventually, when the weight became too great for the natural dam, triggered an eruption of ice and water toward the lake’s main glacial trough.

The last event took place on March 10, 2016, but the avalanche of ice and water could easily have been a metaphor for the flood of tourists that invaded El Calafate in anticipation. On any given day, massive icebergs still calve off the glacier’s 60-meter face and crash into the Canal de los Témpanos (Iceberg Channel) with astonishing frequency.

Perched on newly modernized catwalks and overlooks, many visitors spend entire days either gazing at or simply listening to this rumbling river of ice. Descending to lake level is prohibited because of the danger of backwash and flying ice chunks.

Hielo y Aventura offers full-day “mini trekking” excursions onto the ice (US$140 pp includes transportation from El Calafate). Other options include the more strenuous Big Ice trip (US$152 pp with transporation) and a passive Safari Náutico navigation (1 hour, US$23 pp, transportation not included) that approaches the glacier’s face.

Organized tours to the glacier, 80 kilometers southwest of El Calafate via RP 11, leave every day, as does scheduled transport. Transportation is usually extra for everything except bus tours.

El Calafate’s Hostel del Glaciar runs its own guided minivan excursions (US$40 pp), leaving about 8am daily and returning around 5pm. These include more hiking and a navigation for a waterside view of the lake.

Even larger than the Glaciar Perito Moreno, 50 kilometers long and 10 kilometers wide at its foot, Glaciar Upsala is impressive for its sheer extent, the sizable bergs that have calved off it, and their shapes and colors. It’s accessible only by crowded catamaran trips from Punta Bandera via Lago Argentino’s Brazo Norte (North Arm).

At midday the boat anchors at Bahía Onelli. Bring a bag lunch (skipping the restaurant) to hike to ice-clogged Lago Onelli. The land portion of this excursion is regimented, and the guide-suggested pace—30 minutes from dock to lakeshore—is appropriate for those on crutches. Smoking is prohibited on the forest trail.

Visitors should realize that this is a mass-tourism excursion that may frustrate hikers accustomed to freedom of the hills. If you take it, choose the biggest available ship, which offers the most deck space to see the Spegazzini and Upsala Glaciers. On board, the freshest air is within the cabin of the ALM, whose seats are cramped but where smoking is prohibited; on deck, desperate smokers congregate even in freezing rain. Reasonably priced cakes, sandwiches, coffee, tea, and hot chocolate are available on board.

Puerto Bandera is 45 kilometers west of Calafate via RP 11 and RP 8. For information and reservations, contact concessionaire Solo Patagonia. The full-day trip costs about US$110 per person, US$65 ages 8-16, with a four-course lunch and open bar; it does not include transfer to Puerto Bandera or the US$22 park fee.

On its small cruiser Leal, Cruceros Marpatag offers a full-day excursion, with a six-course gourmet lunch (wine included), to the Spegazzini and Upsala glacier fields (US$270-340 pp, including transfers and park admission). The triple-deck 22-cabin catamaran Santa Cruz now offers three-day, two-night cruises to Upsala and Spegazzini (US$1,785-3,900 s, US$3,360-5,680 d), with a final day’s lunch facing the Perito Moreno Glacier.

Also known as La Jerónima, the park’s little-visited southwesterly sector along Lago Roca’s Brazo Sur (South Arm) offers camping and cross-country hiking. There are no formal trails, only routes such as the one from the campground to the summit of Cerro Cristal, 55 kilometers from El Calafate. The most striking feature is the high shoreline, dry from the days when the lake backs up behind the advancing Glaciar Perito Moreno. Unlike other sectors, Lago Roca charges no admission fee.

In the park’s most northerly sector, the Fitz Roy range has sheer spires to match Torres del Paine. Even if you’re not a top technical climber, trails from the village of El Chaltén to the base of summits such as Cerro Fitz Roy and Cerro Torre make for exhilarating hikes. It’s even possible to traverse the southern Patagonian ice fields. Visitors seeking a sedate outdoor experience will find a handful of former sheep ranches, onetime Patagonian wool producers that have reinvented themselves as tourist accommodations.

From a signposted trailhead at El Chaltén’s north end, the Sendero Laguna Torre is an 11-kilometer track gaining about 200 meters in elevation as it winds through southern beech forests to the climbers’ base camp for Cerro Torre; figure 3 to 3.5 hours. At the lake, in clear weather, there are extraordinary views of Cerro Torre’s 3,102-meter summit, crowned by the so-called ice-and-snow “mushroom” that technical climbers must surmount. While Italian Cesare Maestri claimed that he and Austrian Toni Egger reached the summit in 1959 (Egger died in an avalanche, taking the camera with him), Italian Casimiro Ferrari made the first undisputed ascent in 1974.

From the Madsen pack station, the more demanding Sendero Río Blanco trail rises steeply at the outset before leveling out through boggy beech forest and continuing to the Fitz Roy base camp, climbing about 350 meters in 10 kilometers. About midway to Río Blanco, a signed lateral trail leads south to Laguna Capri, which has backcountry campsites.

From the Río Blanco campground (reserved for climbers), a northbound trail follows the river’s west bank north to Laguna Piedras Blancas, whose namesake glacier continually calves small icebergs. The trail continues north to the Río Eléctrico, beyond the park boundaries, where a westbound trail climbs the river to Piedra del Fraile and a possible circuit of the Campo de Hielo Sur. This is only for experienced snow-and-ice trekkers. At the Río Eléctrico, it’s also possible to rejoin the road from El Chaltén to Lago del Desierto.

From the park visitors center, a short ascent (about 45 minutes) leads to the Mirador de los Cóndores, for good views of El Chaltén and the confluence of the Río de las Vueltas and the Río Fitz Roy.

From the same trailhead, the hike to Loma del Pliegue Tumbado is a 500-meter elevation gain that yields some of the area’s best views. Weather permitting, the panorama takes in Fitz Roy, Cerro Torre, Cerro Solo, Glaciar Torre, and Lago Torre, but the wind at the overlook can be overpowering. Four hours is about right for an average hiker, but the truly fit can do it in three. The descent takes about 2.5 hours.

From Lago Viedma’s north shore, south of El Chaltén, the park’s best lake excursion is the Viedma Discovery’s full-day catamaran to Glaciar Viedma, which can include an ice-climbing component. The less ambitious can settle for just a boat trip.

Sailing from Bahía Túnel, the vessel rounds the ironically named Cabo de Hornos (Cape Horn) to enter an iceberg-cluttered area before anchoring in a rocky cove. After disembarking, visitors hike to an overlook (the glacier is Argentina’s largest, though its lakeside face is small) with additional views of 2,677-meter Cerro Huemul. Those who want to can strap on crampons and continue onto the glacier for about 2.5 hours (even some sedentary city-dwellers do so).

The bilingual guides know glaciology. While the price here does not include lunch, they do provide an aperitif on the glacial rocks.

Departure time from El Chaltén is 8:30am, while the boat sails from Bahía Túnel at 8:15am; the cost is US$160 pp, including transportation from El Chaltén. The more demanding “Viedma Pro” version, which involves ice climbing, costs US$200. The twice-daily “Viedma Light” boat trip alone is US$55 pp. For details, contact Patagonia Aventura. 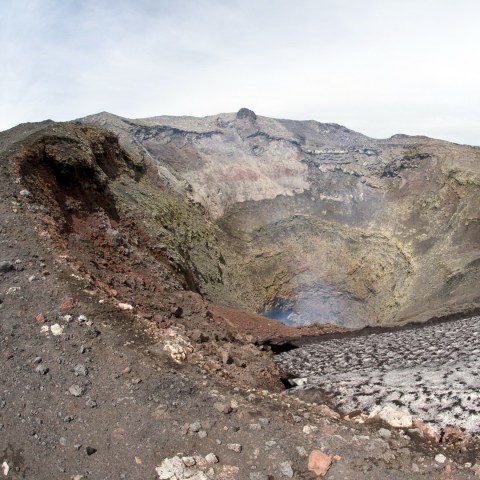 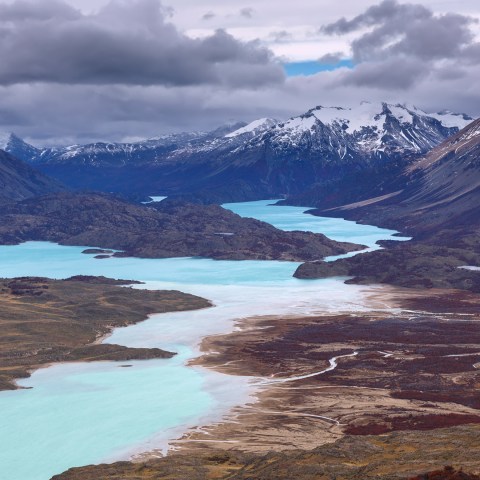 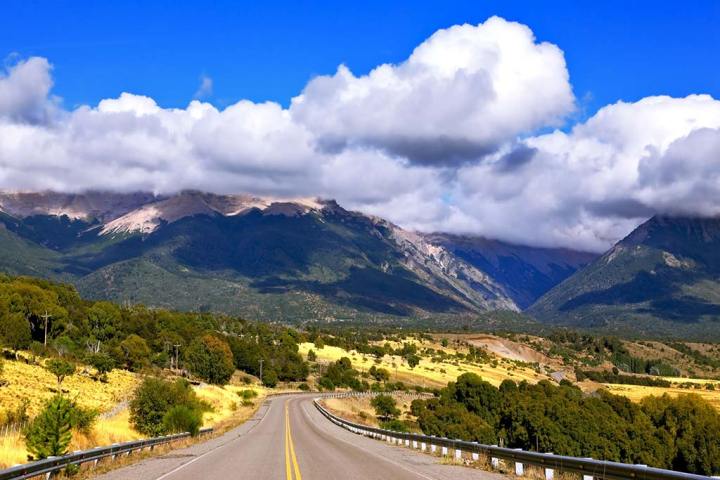