Peter Norbeck, a U.S. senator from South Dakota, was the chief instigator for setting aside the Badlands as a national monument, and that designation was given to the park in 1939. When the park entered into a joint-operating agreement with the Oglala Lakota in 1976 for the South Unit of the Badlands, known as the Stronghold District, the managed area grew to over 244,000 acres with 64,000 acres of wilderness. In 1978, it was designated national park.

A place of otherworldly beauty, the Badlands are also a paleontologist’s dream. Each layer of the Badlands has a story to tell about the plants, animals, and climate of the region at the time of the deposit. The oldest layer, the Pierre Shale, contains the fossilized remains of clams, ammonites, and sea reptiles, proving the existence of the inland sea that once covered the area.

As the sea receded, the area became a lush tropical environment, as evidenced by the Chadron Formation. Deposits in this formation are 35-37 million years old and contain evidence of alligators and palm-type plants in the region. Also commonly found in this layer are many ancient mammals, including a rhinoceros-like creature called the titanothere. Different kinds of fossils began to appear from when the climate cooled and became drier. Evidence of herd animals, including a sheep-like mammal, have been found.

Paleontologists have been doing research in the park since the first published record of a fossil jaw was found in 1846, and the Park Service intends to continue that tradition into the future. In 1993, two visitors to the Badlands discovered a large backbone protruding from the ground and notified park personnel. For 15 years, the Park Service and the South Dakota School of Mines worked together at “Big Pig Dig,” the site where the backbone was found. Over 15,000 bones were recovered from the site, including those of three-toed horses, tiny deer-like creatures, turtles, and a saber-toothed tiger. (There were no ancient pigs found at the site, which was closed in 2008.)

In 2010, a seven-year-old girl participating in the Junior Ranger Program discovered a fossil and reported it. The skull was determined to be that of a saber-toothed tiger. Paleontologists are on-site June-August working to uncover additional fossils. The Paleontology Prep Lab, inside the Ben Reifel Visitor Center, is used to prepare fossils and is open 9am-4:30pm daily end of May-mid-September. Should you discover any fossils in the park, report them to park personnel. It is illegal to take any fossils, plants, or rocks out of a national park; they are to be left where found.

The entrance fee to the park is $15 per car. Bicyclists and pedestrians can enter the park for $7, motorcycles for $10. Passes are good for seven days. The Interagency Annual Pass (America the Beautiful Annual Pass) for designated federal fee areas is valid here. The pass can also be purchased at the gate ($80 annual, $10 lifetime for seniors ages 62 and up). The park is open 24 hours a day, seven days a week.

Pets are allowed in the Badlands but only in “developed” areas, which include campgrounds, roads, picnic areas, and parking lots. They are not allowed on hiking trails, in the visitors centers, or in the Badlands Wilderness Area. They must be on a leash when in the park and cannot be left unattended anywhere in the park. 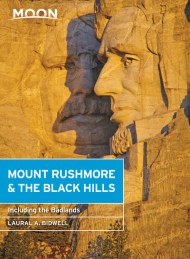 Experience the open skies of the Badlands, the rolling prairies of the West, and one of America’s most famous monuments with Moon Travel Guides.