Pisac is one of the Sacred Valley’s few great Inca ruins that features all types of architecture—agricultural, hydraulic, military, residential, and religious. Little is known for certain about Pisac’s precise function, and there is no mention of it in Spanish chronicles, perhaps because it was never used by the Inca in their battles against the invaders.

It probably began as a military garrison to guard against incursion from the Anti people, who occupied the easternmost corner of the empire known as Antisuyo (present-day Paucartambo and the Manu jungle). Inca emperor Pachacútec probably built Pisac’s imperial architecture and may have used it as a royal residence, while the temples indicate that Pisac also had religious status.

There are two main entrances to the ruins, where you need to present or purchase the boleto turístico. If taking the steep walk from town, you arrive at the terraces at Andenes Acchapata and can climb up toward the Intihuatana, the ceremonial center, and the agricultural and urban zones. However, most people take a taxi to enter the ruins from the parking area next to the main entrance at Qantus Raccay, one of three residential areas in Pisac. It is composed of rough stone buildings, walls with niches, and small squares. These were probably military garrisons and, in the style of a medieval castle, shelter for villagers in times of war. From here you can appreciate some of the best views of the terraces of Pisac—there are 500 in total. Corn was grown on the lower terraces, potatoes in the middle, and quinoa grain on the high terraces. To the right, embedded in the hillside, is a huge Inca cemetery with some 3,500 tombs, although the mummies are long gone.

An Inca trail traverses the hillside, arrives at a small pass, then heads up and over a rocky summit to the sun temple. At the pass, four purification baths flow with water brought down from a lake at 4,500 meters. On the other side of the pass to the left, a 10-minute detour around the corner reveals Inca buttresses, which were once spanned by a hanging bridge made of plant fibers.

The main path crosses through a military wall with a perfect trapezoidal door, known as the Door of the Serpent. Above is the second residential area, Hanam P’isaq (upper Pisac). The path now climbs up steep staircases and niches carved out of the rock itself, alongside a cliff and through the Q’alla Q’asa (Split Rock) tunnel. Faced with a vertical rock face, Inca engineers decided to enlarge a rock fissure and bore through the entire cliff—how they did this, with no iron or steel implements, remains a mystery.

The best view of the Intihuatana, which means “sun calendar” in Quechua, is from above. Like the sun temple at Machu Picchu, the Intihuatana is an oval building of perfect masonry encasing a votive rock. The pillar atop the rock was used to track the sun’s movements, and, fascinatingly, the sun rises precisely above one peak to the east on June 21 and another on December 21. The walls of five other temples surround the temple, including one that was probably devoted to the moon. To the right is a series of restored baths that flow into an underground canal. In front of the Intihuatana is a sacred chacana (Inca cross).

Off the easier trail back to the main entrance of the ruins is P’isaqa, the third and finest residential area, with its own ritual bath. These were probably homes for the elite, as opposed to the military garrisons closer to the pass. Most people head back at this point to the main entrance, though there are two trails from here that make a pleasant two-hour walk back to Pisac. One descends directly to the Río Quitamayo, with spectacular views, while the other drops through the lookout towers of Coriwayrachina and an area of steep terracing. Both trails merge on the other side of the river for the final descent into town.

There are several ways to see the Pisac ruins (7am-3pm, admission only with boleto turístico), but the most popular is to take a US$8 taxi up the eight-kilometer highway to the main entrance. Allow 1.5 to 2 hours to see the ruins and another 2 hours to walk downhill all the way to town (or take a taxi back for a further US$8).

In 2009, Museo Comunitario de Pisac (Amazonas and Federico Zamalloa, 8am-5pm Sun.-Fri., free) opened southeast of Pisac’s center with an exhibition of traditional textiles and a small collection of ceramics from the Pisac ruins. The highlight is the exhibition of Inca mummies. 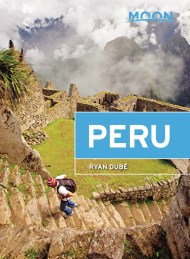 Once the ancient empire of the Inca, Peru still draws visitors with its blend of mystery, lively culture, and beautiful rugged landscape.