It’s fitting that a state nicknamed the Ocean State should have some of New England’s prettiest and most historic lighthouses along its coastline. Rhode Island’s waters are notoriously treacherous, with sunken reefs and narrow passages throughout Block Island Sound and Narragansett Bay. Twenty-one lighthouses still stand along the coastline, 13 of them in use today to guide ships. Of these, only a few are open to the public, but there’s nothing to prevent you from exploring the grounds and snapping pictures to your heart’s content. 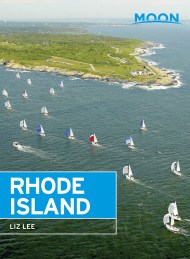