Operating on a shoestring budget? You’ve come to the right city. Budget living is practically a religion in some quarters of Pittsburgh, where a night on the town costs as little as $20 and a day exploring the urban jungle can be had for almost nothing at all. We’ve rounded up the best cheap and free things to do in Pittsburgh to help you make the most of your visit to the Steel City.

For budget sightseeing, take a self-guided tour of the Nationality Rooms inside Pitt’s Cathedral of Learning. After exploring the nearby Schenley Park, stroll the length of the Three Rivers Heritage Trail on the North Shore, which has lately turned into something of an outdoor sculpture garden. And don’t worry about public transit: As long as you stick to the four stops within the Golden Triangle itself and the two North Shore stops, rides on the city’s light rail, known locally as the T, are always free.

Due to its dead-broke student population, Oakland is replete with restaurants serving half-priced food after 11pm. Try Fuel and Fuddle for American pub grub, or Mad Mex for huge and toothsome burritos. And many of the food stalls in Oakland’s Schenley Plaza are dirt cheap, yet of surprisingly high quality.

For budget souvenir shopping, make for the scene on Penn Avenue in the Strip District, where everything from unlicensed Steelers T-shirts to Peruvian finger puppets is on offer. Downtown parking is free on Sundays.

During summer, free movies are screened outdoors in seven different parks, including Schenley Park in Oakland and Grandview Park in Mount Washington. For movie listings and times, call Cinema in the Park (412/422-6426). Mattress Factory offers half-price admission on Tuesday, while admission to the Andy Warhol Museum is half off on Friday 5pm-10pm. Entrance to the Center for PostNatural History in Garfield is always free. Gallery Crawl, the quarterly art walk put on by the Cultural District, is also free.

Kayak Pittsburgh offers fantastic ways to experience the city from a duck’s-eye view; kayaks, canoes, and even hydrobikes and stand-up paddle boards can be rented for roughly $16-19 an hour. The Pittsburgh History and Landmarks Foundation offers scores of free walking tours. 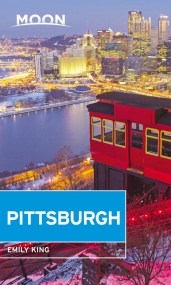 Take in the young, vibrant scene of a city on the rise and learn what it really means to be a Yinzer with Moon Pittsburgh.