The Alaska Marine Highwayoperates two primary state networks: one from Bellingham, Washington, and throughout Southeast Alaska; the other through Southcentral Alaska from Cordova all the way to Dutch Harbor in the Aleutians. In addition, a ferry sails between Whittier and Juneau twice monthly in the summer, linking the two regions.

In Southcentral Alaska, Alaska Marine Highway ferries serve the communities of Whittier, Homer, and Seldovia. There is no ferry service to Anchorage or Seward. From Whittier, the ferries head east to Valdez and Cordova. From Homer, ferries head to Seldovia and on to Kodiak, with once-monthly summer sailings to the Aleutians.

The ferries have a relaxed and slow-paced atmosphere; it’s impossible to be in a hurry here. Many travelers think of the ferry as a floating motel—a place to dry off, wash up, rest up, sleep, and meet other travelers while at the same time moving on to new sights and new adventures. Ferry food is reasonably priced and quite good, but many budget travelers stock up on groceries before they board. The hot water is free in the cafeteria if you’re trying to save money by bringing along Cup-O-Noodles and instant oatmeal.

Alaska state ferries carry both passengers and vehicles, and offer food service, stateroom cabins, showers, storage lockers, gift shops, and cocktail lounges. Staterooms offer privacy, as well as a chance to get away from the hectic crowding of midsummer. These cabins have two or four bunk beds, and some also include private baths; other folks use the baths and showers down the hall.

If you don’t mind hearing others snoring or talking nearby, you can save a bundle and make new friends with fellow voyagers. There’s generally space to stretch out a sleeping bag in the recliner lounge (an inside area with airline-type seats), as well as in the solarium—a covered and heated area high atop the ship’s rear deck. The solarium has several dozen deck chairs to sit and sleep on, and it can get so popular that at some embarkation points there’s a mad dash to grab a place.

The ferries operate year-round. Get schedules and make reservations by calling or visiting ferryalaska.com (907/465-3941 or 800/642-0066). Reservations for the summer can be made as early as December, and travelers taking a vehicle should book as early as possible to be sure of a space. The ferry system charges an extra fee to carry bicycles, canoes, kayaks, and inflatable boats. 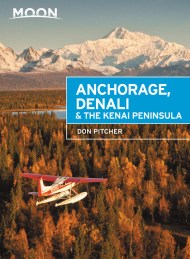 Adventure awaits on the Last Frontier: make your way through Alaska’s mountains, glaciers, and rivers with Moon Anchorage, Denali & the Kenai Peninsula.

Planning an Alaskan Vacation: Where and When to Go

Adventure awaits on the Last Frontier: make your way through Alaska's mountains, glaciers, and rivers with Moon Anchorage, Denali & the Kenai Peninsula. Inside you'll find:

Find your adventure in Anchorage, Denali and the Kenai Peninsula with Moon's expert advice and local insight.