The city of St. Petersburg lies on the bay side of the Pinellas County peninsula. It has more history, more of a sense of place and sophistication than the beach towns along the Gulf side. There are romantic bed-and-breakfasts, fine restaurants, and cultural attractions. If you are planning a trip to Florida, here are some of the best things to see in St. Petersburg.

Perhaps the most popular art museum in Pinellas County is the Salvador Dalí Museum (1 Dali Blvd., St. Petersburg, 727/823-3767, 10am-5:30pm Fri.-Wed., 10am-8pm Thurs., $24 adults, $22 seniors, military, police, firefighters, and educators with ID, $17 students, $10 ages 6-12, free under age 6), the world’s most comprehensive collection of permanent works by the famous Spanish surrealist master, with other exhibits relating to Dalí. Opened in 2011 to worldwide acclaim, the architect Yann Weymouth designed an awe-inspiring building described as a “building that combines the rational with the fantastical: a simple rectangle with 18-inch thick hurricane-proof walls out of which erupts a large free-form geodesic glass bubble known as the enigma.” The impressive helical staircase inside the building recalls Dalí’s own obsession with spirals and the double helix shape of the DNA molecule.

The new Avante Garden outside the building extends this theme and provides a calming space to explore the relationship between math and nature. The new museum has quickly become nearly as popular as the collection housed inside. AOL Travel News listed the museum as one of the top 20 buildings to see in your lifetime, and the Florida Association of the American Institute of Architects named it as the top museum design in the state.

Dalí himself is as recognizable as his “paranoiac-critical” paintings. Maybe only Van Gogh in his post-ear incident self-portrait is more reliably identified than Dalí, with his long waxed mustache and extreme arched eyebrows. Upon moving to the United States in the 1940s, Dalí made himself the lovable eccentric who introduced the average American to surrealism—and the average American really liked it.

The Salvador Dalí Museum is a dense concentration of his surrealist works, what he described as a “spontaneous method of irrational knowledge based on the critical and systematic objectivation of delirious associations and interpretations.”

The museum is wonderful—a great space where the work is described and presented well. Even if you don’t care for what you have seen of his work in books and prints, it is an incredible experience to view the original works in their larger-than-life sizes. And if you have never experienced his works at all, the museum is almost sure to make you a fan.

In 2008, the Museum of Fine Arts (255 Beach Dr. NE, St. Petersburg, 727/896-2667, 10am-5pm Mon.-Sat., noon-5pm Sun., $17 adults, $15 seniors and military, $10 students and ages 7-18, free under age 7) unveiled its much-anticipated Hazel Hough Wing. It started with a gangbuster exhibition of works that have been rarely on view, or in some cases never before displayed at the MFA. Featuring works by such noted artists as Renoir, Léger, Pissarro, Matisse, Fabergé, Chuck Close, and James Rosenquist, it showcased just how marvelous the museum’s collection is. Right on the waterfront adjacent to Straub Park, the museum contains a full range of art from antiquity to the present day. The collection of 4,000 objects includes significant works by Cézanne, Monet, Gauguin, Renoir, Rodin, and O’Keeffe. Its permanent collection’s strength is 17th- and 18th-century European art, and the museum has a lovely garden as well.

St. Petersburg Museum of History (335 2nd Ave. NE, St. Petersburg, 727/894-1052, 10am-5pm Mon.-Sat., noon-5pm Sun., $15 adults, $12 seniors, $9 military, veterans, students, and ages 6-17) is one of the oldest historical museums in the state, with family-friendly displays and exhibits depicting St. Petersburg’s past. It was remodeled and enlarged in 2005, with a local history exhibit that contains a Native American dugout canoe, an exact replica of the world’s first scheduled commercial airliner (it flew out of St. Petersburg), and lots of other interesting exhibits.

The Florida Holocaust Museum (55 5th St. S., St. Petersburg, 727/820-0100, 10am-5pm daily, $16 adults, $14 seniors, $10 college students, $8 under age 18) is the third largest of its kind in the United States. Part of the museum is devoted to the memory of the millions of victims of the Holocaust, and it also showcases loosely linked exhibits, such as the work of Czech artist Charles Pachner (who lost his whole family during the war) or the mixed-media paintings, sculptures, and installations of contemporary French artist Marc Ash.

After spending time at Sunken Gardens, give the kids their due next door at Great Explorations (1925 4th St. N., St. Petersburg, 727/821-8992, 10am-4:30pm Mon.-Sat., noon-4:30pm Sun., $10, $9 seniors, free under age 2). The hands-on science center has lots of slick educational exhibits on things like the hydrologic cycle or ecosystem of the estuary. Many of the exhibits are best appreciated by kids up to about age 11, but exhibits such as Gears and the Laser Harp have appeal even to older kids. If your family enjoys hands-on science museums, head over to Tampa’s MOSI for a bigger dose.

As of 2017, The Pier (800 2nd Ave. NE, St. Petersburg, 727/895-7437) is undergoing a massive renovation that will bring more waterfront commerce space and extend the park along the shoreline. When it’s finished, you’ll be able to rent bikes, grab a rental rod and reel and fish off the end, visit the little aquarium, dine in the family-friendly food court, or browse the complex’s many shops. During renovation, you can still depart from the marina on a sightseeing boat charter, or see a flick at the 20-screen movie theater nearby. 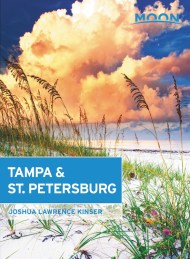 A buzzing city center, quaint historic harbor, and more than 35 miles of Gulf Coast beaches: get to know this unique part of the Sunshine State.