During the 1850s, about 900 of St. Ann’s residents, dissatisfied with Cape Breton, sailed away to Australia and eventually settled in New Zealand, where their descendants today make up a good part of the Scottish population. Despite this loss of nearly half its population, St. Ann’s, 80 kilometers south of Ingonish and 30 kilometers north of Baddeck, is today the center of Cape Breton’s Gaelic culture.

The only institution of its kind in North America, the Gaelic College of Celtic Arts and Crafts (51779 Cabot Trail, 902/295-3411) was established in 1938. Programs include Highland dancing, fiddling, piping, Gaelic language, weaving, and other subjects. The summer session attracts Gaelophiles from around the world. The Great Hall of the Clans (July-Aug. daily 9am-5pm, free), on the campus, examines the course of Scottish culture and history, including the migrations that brought Highlanders to Cape Breton. Activities include weaving and instrument-making demonstrations, as well as music and dance performances (July-Aug. Mon.-Fri.). The campus gift shop sells a predictable collection of kilts and tartans.

The popular Celtic Colours International Festival (902/567-3000 or 888/355-7744) takes place the second full week of October. It celebrates Cape Breton’s Gaelic heritage through concerts held at venues around the island, but the Gaelic College of Celtic Arts and Crafts is a focal point, especially for its nightly Festival Club, where musicians get together for an unofficial jam after performing elsewhere. The festival proper features six or seven concerts nightly, usually in small town halls, with visitors enjoying the brilliant colors of fall as they travel from venue to venue.

St. Ann’s is 80 kilometers (over an hour) south of Ingonish and 30 kilometers (25 minutes) north of Baddeck. To get to St. Ann’s from Halifax, it’s 400 kilometers (five hours) northeast. 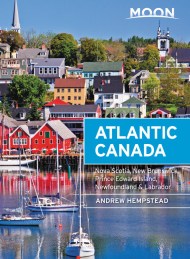