The life and contribution of the coastal Carolinas’ African American population is a testament to resilience, resourcefulness, and authentic culture. Here are the key sights in the region: You can visit all of these North and South Carolina African American history sites on a five- or six-day road trip with stays in Wilmington, Charleston, and Beaufort, South Carolina, or combine them with other sights when you’re headed to just one area. 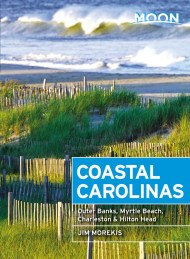 Refreshing sea breeze, aquatic adventures, and over 500 miles of scenic coastline: get to know this unique stretch of America.