Bermuda’s black heritage and the 200-year legacy of slavery on the island are remembered through a chain of monuments and museums. The African Diaspora Trail belongs to an international group of heritage sites by the same name, all officially designated UNESCO Slave Route Projects. There are a dozen points of interest on the island, each marked by a bronze plaque. Six of these are located in St. George’s. If you dedicate a full day, you could begin at the National Museum of Bermuda at Dockyard in Sandys, then take the fast ferry to St. George’s and bus or scooter back through the central parishes. Some of the key sights and points of interest along the trail

The West End’s Commissioner’s House, at the National Museum of Bermuda, contains exhibits and compelling artifacts detailing the island’s part in the transatlantic slave trade, as well as slavery in Bermuda. Ships carrying enslaved people often smashed on Bermuda’s reefs, leaving artifacts such as iron manacles, glass beads, and cowry shells belonging to the human cargo. Many Bermuda families can trace their roots to enslaved people who worked as farmers, ship pilots, whalers, or carpenters on the island before slavery was abolished in 1834.

Warwick Parish’s Cobb’s Hill Methodist Church was built by enslaved and free blacks, who often toiled “by moonlight” in the after-hours allowed by their masters. A Chief Justice permitted a piece of land to be released for the project, and the church was finished in 1827. Today, it is located on Moonlight Lane, and its congregation includes descendants of those who labored to build it.

Barr’s Bay Park, on the City of Hamilton waterfront, is included on the trail, as it was the place where an American schooner named the Enterprise landed in 1835. Sent off course by a storm, the ship was carrying a cargo of 78 enslaved people—an illegal activity in Bermuda a year after abolition. Local officials refused to clear the vessel, and members of a Bermuda Friendly Society took the captain to court. The enslaved people eventually were allowed to choose whether to stay in Bermuda or return to the United States. All but one woman and her five children opted to remain on the island; the descendants of those 72 people can still be found in Bermuda.

A Bermuda National Trust property (although not open to the public), Verdmont Cottage, alongside the historic house in Smith’s Parish, was once a slave quarters. Slaves would have helped build the main house, living in the outroom and buttery. Later, they worked as laborers or domestic help. Verdmont Cottage was the property’s original kitchen, and archaeologists believe it also served as slave quarters.

Site of a dedicated graveyard for enslaved people, St. Peter’s Church in the Town of St. George hosts a special ceremony each Emancipation Day (late July or early Aug.) to remember Bermuda’s enslaved. Inside the church, a gallery on the western end was built in the early 1700s to allow free and enslaved blacks to attend services in the segregated society. The graveyard is located outside the gallery, separated from the main gravesite of many of the early town’s white citizens. An interesting artifact in the church is a baptismal register for 1834, in which a line drawn at the month of August indicates when blacks no longer had to be entered as “slave” or “free.”

Opened in 1994, the Bermudian Heritage Museum in the Town of St. George celebrates achievements of black Bermudians, including personalities in music and sports, the gombey tradition, and members of Friendly Society lodges who helped blacks adjust to life after emancipation.

For more information on the African Diaspora Trail, contact the Department of Cultural Affairs (tel. 441/292-9447), or Bermuda’s Visitor Information Centres throughout the island. 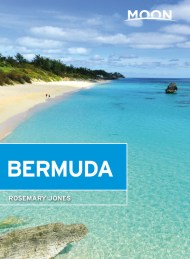 Impossibly turquoise bays, pink sands, and hibiscus-scented breezes: go with the flow and experience a fantasy come to life.