Gone are the days when a museum visit involved merely looking at dusty artifacts. Today visitors can enjoy interactive experiences that are fun for the entire family, and this is especially true at the museums in Oslo, Norway.

The city of Oslo is investing in a new National Museum to replace the vast collection of paintings, drawings and sculptures currently spread over multiple venues, including the National Gallery. Although this world-class cultural attraction won’t be ready until 2020, there are plenty of incredible museums to see right now.

While Stockholm is known as the home of the Nobel Prizes, the Nobel Peace Prize is actually awarded every year in Oslo. Celebrate the efforts of the committee at the Nobel Peace Center, which looks at the impact of the award over the years along with a temporary exhibit all about the current holder.

The Bygdøy peninsula is an upscale residential neighborhood linked to downtown Oslo by a short ferry ride (available in the summer only). While the peninsula is known as the home of the who’s-who of Oslo society, it’s also home to the city’s best museums.

The Norwegian Museum of Cultural History is the best of Norway’s open-air museums. More than 150 buildings are on display including the stunning 13th-century Gol Stave Church, which was moved here to save it from demolition, farmhouses from the middle ages, and an 1865 tenement building from central Oslo.

If you’re traveling with kids, visit in the summer when the museum comes alive with actors playing the parts of the former residents, folk dancing, lefse (traditional Norwegian pancake) baking, and many activities for children.

A short walk away, the Viking Ship Museum is an ever-popular stop for visitors to Oslo. Three real Viking ships built in the 9th-century play the starring role, but arguably more interesting are the other exhibits that take you on an eye-opening journey through everyday Viking life.

Staying with the ocean theme, Bygdøy is home to a further three maritime-themed museums. Best of the bunch is the Kon-Tiki Museum that tells the story of Norwegian explorer Thor Heyerdahl’s 5,000-mile journey across the Pacific Ocean on a balsawood raft.

A Life’s Work Out in the Open

Continuing the open-air theme, Vigeland Sculpture Park at Frogner Park is home to 200 sculptures making up the life’s work of Gustav Vigeland. The park’s most famous sculpture is the enormous monolith, while the on-site Vigeland Museum gives a wonderful insight into how the park was put together.

Best of the Rest

The eye-catching Astrup Fearnley Museum of Modern Art on the swanky waterside Tjuvholmen development houses a private collection of works with a strong international influence from the likes of Alex Israel, Matthew Barney, Cindy Sherman, and Damien Hirst.

If you’ve been inspired by Norway’s performances at the Winter Olympics, take a trip up the ski tower to see the remarkable views of Oslo that athletes get just before they set off. On your return to terra firma, the Holmenkollen Ski Museum, the world’s oldest skiing museum, takes you on a snowbound journey from Norwegian polar explorers through to the snowboarders of today.

Last but not least, Oslo’s Akershus Fortress is the place to go for all military enthusiasts. The visitor center doubles as a small free museum about the castle itself, but also worth a look are the Resistance Museum for World War II memories and the Norwegian Armed Forces Museum to get a fuller picture. Both museums are on the grounds of the fortress. 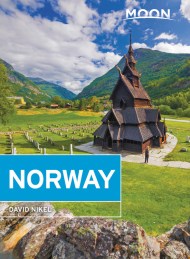 Explore magnificent fjords, gaze at magical northern lights, and get to know your inner Viking with Moon Travel Guides.